I really enjoyed painting the Spanish Gendarmes I worked on previously, http://camisado1500s.blogspot.co.uk/2013/11/spanish-gendarmes.html , so I decided to pick up a few more packs of Wargames Foundry Men at Arms and put them on TAG Horses. Unlike the previous figures most of these were not ones that had been lying in a draw for about 15 years so it was a rather more expensive project! I decided to mount these figures on horses with slightly more decorative trappings than the first lot. This includes the horse that TAG make for Henry VIII, shown in the first picture below. While I am pleased with the figures I think I preferred the more simple group that I painted before. They are shown here with Petes Flags for the Kingdom of Naples, representing the Men at Arms and Knights that defended, or perhaps failed to defend might be more accurate, Naples against the French Invasion in 1494. Seeing as over half of them in are in gothic armour its probably not a very accurate depiction but I wanted to use these great flags.
I have done a few head swaps and removed the plumes on some of the miniatures, the results of which I think are ok but not perfect. One the of the figures I still had from many years ago was wearing a late 15th century style tabard. I turned my hand to the dreaded greenstuff and made an attempt to change the tabard into the longer style of skirted coat that was worn in the 16th century. It was not a pleasant experience, I still find that stuff a nightmare to use, but I think the result is passable, especially once the figure is painted as shown below. 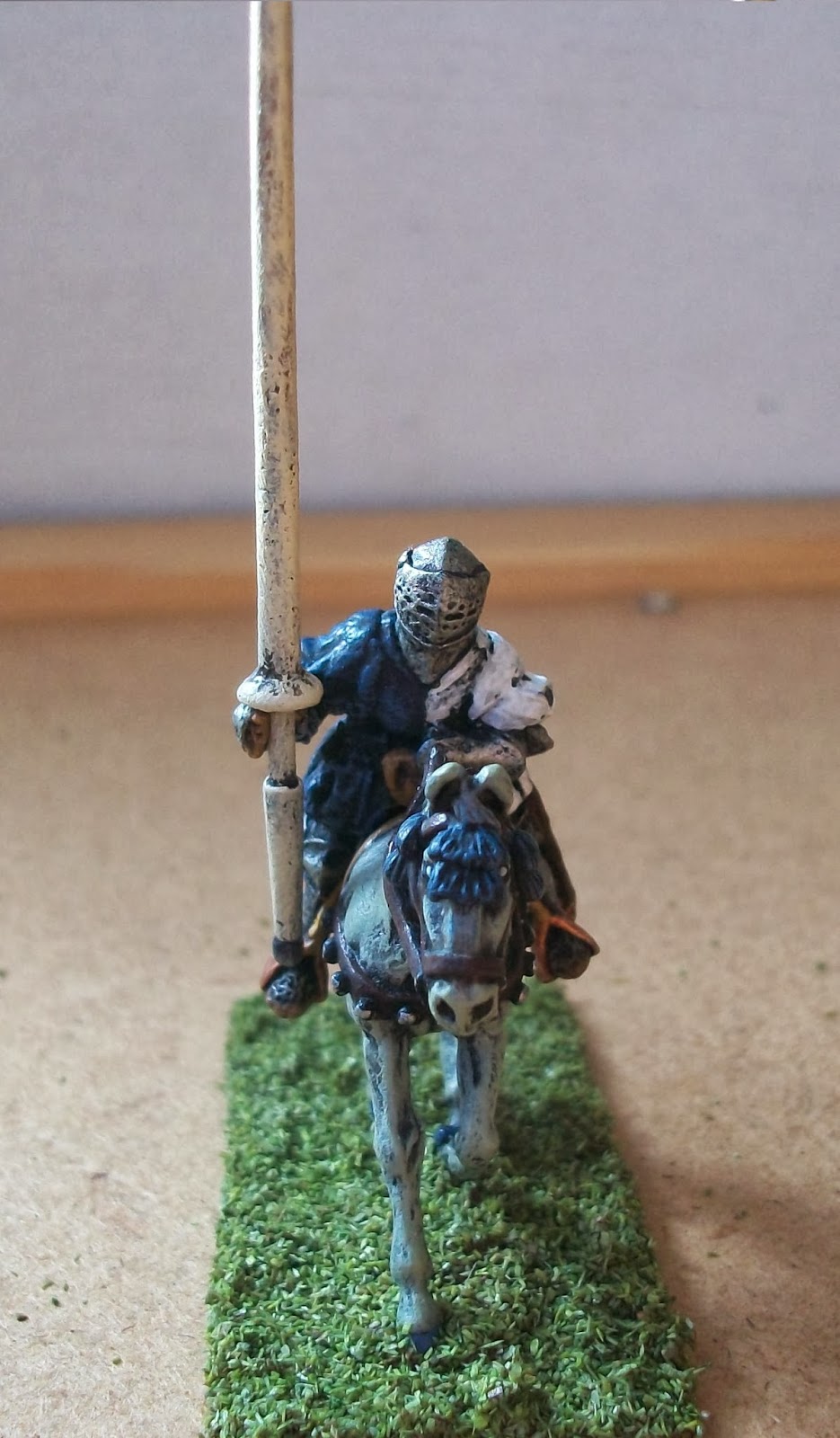 I think these are extremely useful figures as while they are in essentially late 15th century harnesses, some of the gothic ones especially, at the start of the 16th century it seems Men at Arms were still armed in these styles. I am unsure as to exactly when they started looking like the plumed and skirted Gendarmes that appear in woodcuts and paintings of the Italian wars but I thought I would add a few contemporary sketches and pictures that show that in the first decade of the 16th century at least they were still being depicted in styles more akin to the late 15th century.
In Paul Dolnsteins wonderful sketches from the very start of the 1500s he depicts his Landsknecht comrades facing Men at Arms that would not look far out of place 20 years earlier. Similary the painting by Juan de Borgona of the Conquest of Oran from c.1514 depicts the Spanish Gendarmes supporting their Jinetes in fairly simple unadorned harnesses. Finally the detail from the Schweizerkrieg of c.1500, illustrating the Swabian war between the Hapsburgs and the Swiss Confederacy, shows mounted men who are already in the skirted coats that become familiar in the 1510s and 1520s but are still wearing Sallets and plate that would not have looked out of place decades earlier.
I think when these figures are mixed with the Foundry and TAG Men at Arms that I have already painted they will be excellent for representing Gendarmes for the very early Italian wars or perhaps the less heavily armed mounted archers that supported them.

While I am on the subject of Men at Arms I thought I would briefly mention my current reading, The Soldier in Later Medieval England: http://www.amazon.co.uk/The-Soldier-Later-Medieval-England/dp/0199680825/ref=sr_1_1?ie=UTF8&qid=1393672866&sr=8-1&keywords=the+soldier+in+later+medieval+england . While I appreciate this book is not cheap, I am about two thirds of the way through and I have found it excellent so far. The database of English and foreign soldiers who fought for the English Crown from 1369 to 1453 has been evaluated and examined and the first findings and trends discovered are discussed. The level of detail and the information they were able to find is remarkable and I have found it fascinating. It is full of tables based on this information, so for example 92% of the English Peerage during this period engaged in military service with 37.5% of them being between 16 and 20 when they first served. 10.6% were under 16 when they first served. With regard to the Archers I was surprised to learn that in very small retinues they were often related to the Men at Arms leading the retinues, that some archers were the younger sons of gentry families and that there was a fair bit of movement between the rank of Archer and Men at Arms especially in some of the longer serving garrisons in the 1400s. Hopefully the price will come down but for anyone interested in the Hundred Years War I would highly recommend this book.