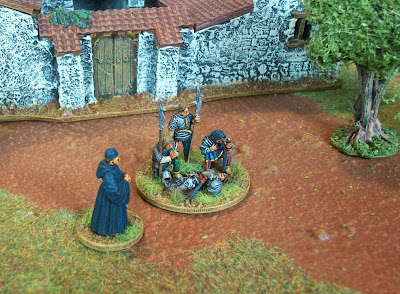 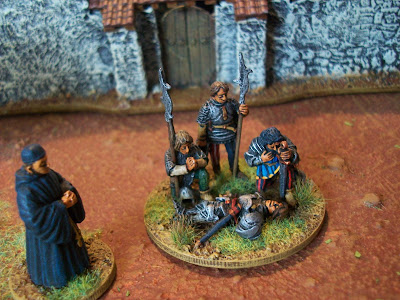 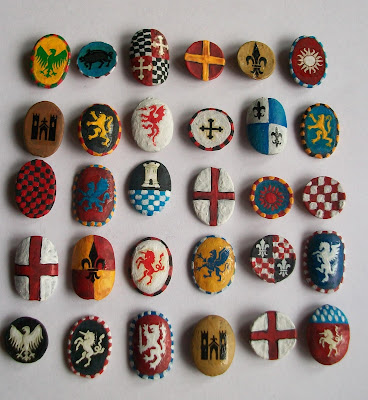 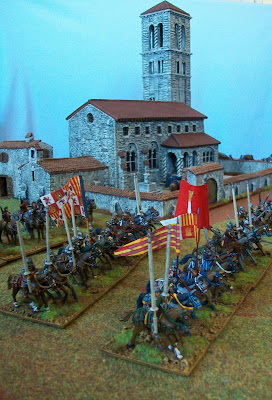 This post is basically just an excuse to show some pictures of a new (well newly painted) scenic item. Over the summer I had the chance to finish a project I started last November, painting up the fantastic Convent building that GrandManner make in resin http://www.grandmanner.co.uk/Convent_building--product--116.html . It was actually a fairly easy task, once it had been washed and all the excess resin trimmed off, although I am not entirely sure my painting skills have done it full justice. There was no way I was attempting stained glass windows or anything like that!
I will admit that I think the building it is based on was actually built in the early 17th century so there may be a little anachronism in the architectural stlyle! Despite this I really feel it looks the part for an Italian ecclesiastical building, be it an Abbey, Convent or Monastery. I have seen the same piece used in Medieval and Italian Wars games before at shows and I could not resist! It makes a great backdrop for the miniatures and also adds a certain depth to the photos that I wasn't expecting.
I have also had time to set up my full battlefield and of course had to take some photos of the new building with some miniatures. So below we have pictures of the early Italian Wars with a Spanish and Italian force arrayed in front of the Convent, the French and their Swiss mercenaries leading an assault. 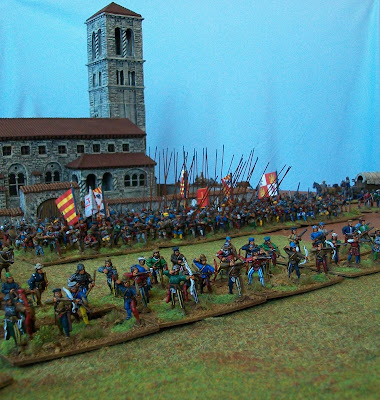 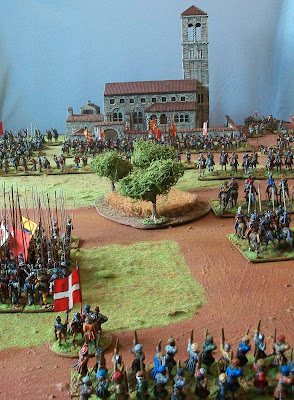 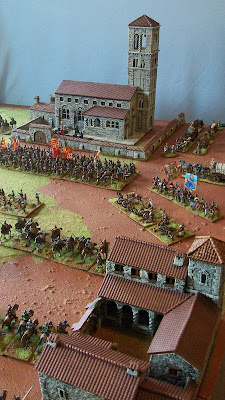 I was keen to see how the Perry Jinetes I converted a while ago fitted in to my Spanish Army and I am really pleased with the result. The Perry Light Cavalry kit allows for some very dynamic figures, I still have two more boxes to paint and feel another set of Jinetes may be the fate of one of them. They were certainly a mainstay of the Spanish armies in the early phases of the Italian Wars.
One of my favourite things when collecting this era is the mixing of late medieval and early renaissance figures. The pictures below show this well. They represent French Gendarmes (who don't seem to have had time to put on any barding!) for around 1500. A mix of late 15th and early 16th century Harnesses with the lighter equipped "archers" making up the supporting rank for the Gendarmes. There are Foundry, Perry, Assault Group and Eureka miniatures all mixed together and I love the result. No fully slashed clothing or Gendarmes in the style of Maximilians Triumph quite yet. I am tempted to get some of the Mirliton Condottieri to add to this mix, they have some particularly impressive helmet crests that may be a little more 15th century but certainly wouldn't look out of place in the early Italian Wars.