"Mantlets and Gabions", the title sounds like the name of an overpriced London pub. Anyway this is a project I have had on the back burner for a while now. I have completed nine bases of Mantlets to place in front of the different artillery pieces in the collection. Unfortunately the guns are all in storage at the moment so this post is just on the completed defences that will go in front of them. As soon as I get the chance I will take some photos of them with the guns - I am very keen to see how they work together myself!

The idea was to create some defences that look akin to those seen in the contemporary art. I have included a few below. One from the Kriegsbuch of 1496, another from the Weisskunig a couple decades later and an early 16th Century picture that I don't know the source of. In the old book I got it from it says it is by Dürer but to be honest I am not sure. They all show Mantlets and Gabions being used to protect the artillery. You may notice it is only guns that are not on moveable carriages that are protected in this way in the images. I guess wheeled artillery could simply be rolled up to fire and then withdrawn again before being reloaded, it would recoil a fair way anyway.


The Mantlets are by Old Glory, really great pieces but I did have a small disaster when constructing them. On the picture on the US Old Glory site, one is shown constructed the wrong way round, the supporting horizontal planks are shown facing the oncoming fire. When talking about one of their gun miniatures in a previous post I thought it was constructed incorrectly in the image on the website. I am pretty certain the same is true here. Annoyingly I glued four of them together like this before realising my mistake. They were glued so strongly that a couple of them didn't survive my attempt to correct them. When correctly put together and painted up I really feel they look the part though.

I am well aware that men of the early renaissance loved painting stuff so really I guess the Mantlets should have Habsburg Saltires, the Papal Crossed Keys, Venetian Lions or French Fleurs de Lis on them depending on what besieging army they are in. I dread this kind of painting however and more importantly I wanted them to be far more generic so I have gone with some in plain wood and others painted red or black which I feel works well. The ropes to swing the mantlets are just fuse wire cut and bent into the correct shape. I was worried this was going to be a nightmare to do but it was surprisingly simple and achieves a quite natural looking rope effect. The fact this was easy to achieve made up for the earlier gluing disaster!

The Gabions are two packs of the Renedra plastic Gabions sprues. They were quite a lot of work as the tops are just circular bits of plastic, just like tiddlywinks really. To improve on this they all have gravel glued and painted on the top to represent the earth. The wicker work also needed a fair bit of trimming and filling in where the halves glue together. They are oval in shape rather than perfectly round and because of the size of the bases I was using, an 80mm frontage to match the frontage of all my artillery bases, I generally had to base them up with the join showing. This is a little annoying as they definitely look better where you can't see the join but I am happy they fitted the bases well with the Mantlets.

For the men swinging the Mantlets open, or waiting to do so, I have used a mix of Perry Miniatures and Pikemen by The Assault Group. There are a fair few head swaps in there, I wanted the men looking up at the mantlets as they raised them or at each other as they prepared to swing them open. I would have rather not have had so many chaps in back and breast plates crewing them but to be honest I was at a loss as to what figures to use for the task and the pikemen were in the most suitable poses. As always with my collection I was also keen to not make them look too medieval, I am aiming for a 1500-1520 sort of look, if such as thing is possible. The fashions changed extremely quickly in this period.

So here they are, some are left without crew, I was imagining the gunners may be in the process of reloading the gun and then some of them will raise the Mantlet after. I went for more closed ones as in reality they would be open for only a very brief space of time. I think my favourites are the two where they are about to open them, I have a feeling they will look great in front of the guns where a crewman is holding the linstock and shouting, getting them to swing it open as he is about to fire! I do realise that the guns will be quite a distance from the Mantlets and Gabions. In contemporary art they are often shown literally underneath the Mantlets as they open. This was the compromise I had to make however if I wanted the defences to be interchangeable with different artillery pieces and for my artillery pieces to still be useable as guns on the field without any defences.

My next post will be number 100 so I think setting up some suitably ridiculous siege scene may be the best way to celebrate number 100 and show the guns and their defences working together. 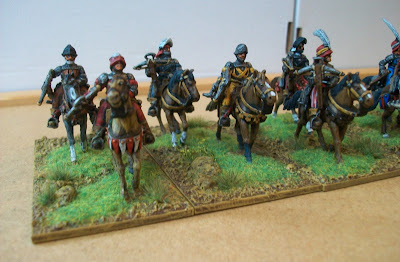 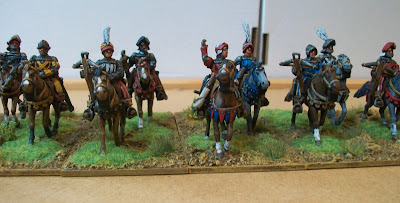 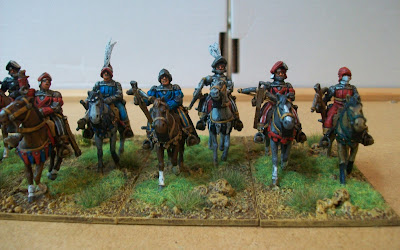 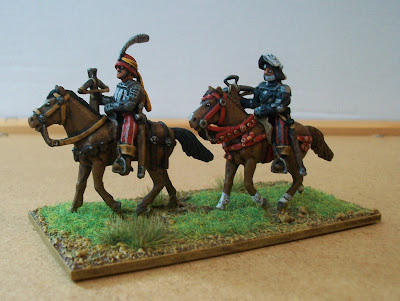