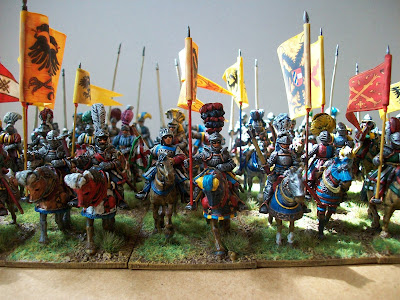 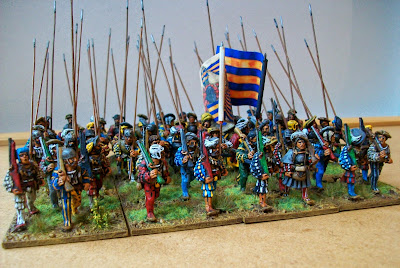 This was the rebasing task I was dreading the most - rebasing and reorganising the Landsknechts. I had images of wire pikes breaking and going everywhere as I pulled figures off their old bases and the size of the task alone put me off. The Landsknecht part of my Italian Wars collection is essentially an army in itself. There were a few breakages and I did manage to drop something at my painting desk and lean down to pick it up only to get a forehead full of 45 degree pikes (I'm glad they aren't sharp) but thankfully they are now all rebased. For a while I have thought about doing a blog post where I compare and talk about the different Landsknecht sculpts available in 25-28mm and this post also gives me the chance to do this. I have included links to the different manufacturers in case anyone wanting to collect landsknechts in this scale happens across this post.
The first couple of photos are all of Wargames Foundry Landsknechts, http://www.wargamesfoundry.com/our-ranges/renaissance/infantry, sculpted by the Perrys (there is one pack not sculpted by them but these figures are tucked at the back of the Artizan block shown below). For me these are still the best available in terms of pose, variety and historical accuracy. I would date them from around 1510-1515 through to about 1525-1530, so they are perfect for many of the big Italian Wars clashes - Marignano, La Biccoca, Pavia. The marching arquebusiers at the front include some minor conversions I showed in an earlier post: http://camisado1500s.blogspot.co.uk/2015/03/marching-arquebusiers.html . The Landsknecht guns and crew that the Foundry do are beautiful, http://www.wargamesfoundry.com/our-ranges/renaissance/artillery, some of my favourite Italian wars miniatures, and are shown in an earlier post: http://camisado1500s.blogspot.co.uk/2015/01/the-rebasing-continues.html .


The next group are the standing Landsknechts, a mix of Pro Gloria Miniatures and Wargames Foundry figures. These Pro Gloria figures were some of the first they produced (they are now sold by Warlord Games: http://store.warlordgames.com/collections/landsknecht). They fit perfectly with the Foundry figures both in terms of scale and date. In fact it can be hard to tell which is Foundry and which is Pro Gloria when the are all based up together. Unfortunately the Pro Gloria Arquebusiers (shown below) are not quite as good sculpts, which is a shame. Warlord have released some new figures for this range and have more on the way but they don't seem to be quite as accurate as these original pikemen and command figures. At Salute this year I picked up their "Landsknecht Looters" set. This is a beautifully sculpted set but anachronism does seem to have crept in a little - the figure holding a torch in this set is wearing Plunderhose (or maybe it's Pluderhose) the large baggy hose which didn't appear until the 1550s. This doesn't really sit well with the rest of the figures who are in clothing more suited to the 1520s-1530s. It depends how fussy you are about your Landsknechts and it is one of the problems of this troop type. They were around from the 1490s through to the end of the 16th century, during which they had many distinctive fashions. I am still waiting for a manufacturer to decide to do some early Landsknechts for 1495-1505, in the style of Paul Dolnsteins sketches, but I doubt we will see any soon!

Next up is a unit made again of Pro Gloria and Foundry figures. One of the advantages of rebasing everything was being able to mix the figures. When I originally painted the Foundry Landsknechts the Pro Gloria ones didn't even exist so it has been good to have a bit of a reorganisation and put them on bases together. If you look at the left hand of the front rank you will see the Pro Gloria Frundsberg figure has snuck in there, he was too nice to leave out!


In total I have 7 bases of Foundry Landsknechts in the attacking pose below. I know it's not a popular pose with wargamers as the horizontal pikes are a bit of a nightmare to try and game with but they do look the part. A while ago I converted some of these figures to more closely represent Reisläufer, http://camisado1500s.blogspot.co.uk/2013/05/wip-more-swiss-pike.html , and these are shown in contrast to the Landsknechts in the second photo. The Reisläufer will form the front rank of my Swiss block, the rest of which has already been rebased.


To follow are my Old Glory Landsknechts - 12 bases of 6 figures each, http://www.oldgloryuk.com/landsknechts/17/39/77/72 or http://www.oldgloryminiatures.com/products.asp?cat=199 . These are certainly figures where a touch of anachronism has crept in. I think they are meant to represent the same period as the Foundry Landsknechts, the 1510s to 1520s, but there are some very baggy hose which would be more suited to a few decades later and some fur hats and helmet styles that would also seem more appropriate later. That being said I think they capture the rakish feel of Landsknechts brilliantly and I love the big sun hats some of them wear as well as the hats that seem to be entirely made of feathers! For me they work fine to bolster the centre of my Landsknecht blocks but they are not as nice as the Foundry figures and the Pro Gloria Pikemen. They are less pricey than the other figures but require the hands to be drilled out to take the pikes which is a fair bit of extra work when you consider they come in bags of 30 miniatures.

The below Pike block is made predominantly of Artizan Landsknechts, http://www.artizandesigns.com/list.php?man=20&cat=137&page=1, although there is also one base of Foundry Landsknechts, that weren't sculpted by the Perrys, http://www.wargamesfoundry.com/files/7413/8735/7972/REN011.png, a few Assault Group figures, http://www.theassaultgroup.co.uk/index.php?prod=1370, and a few Old Glory figures tucked in there as well. The arquebusiers on the side are Pro Gloria and Old Glory. Again suitable for the 1510s-1520s the Artizan figures are quite large sculpts and the clothing doesn't seem as convincingly sculpted as it does on the Foundry and Pro Gloria figures. I'm really not keen on their Landsknecht arquebusiers and I think the 16 I painted will be destined for Ebay at some point. In contrast the command set I bought from Artizan, shown below, is really nice, the officer with his hat off is a miniature full of character.

Following on from the Landsknecht pike are 8 bases of skirmishing Landsknecht Arquebusiers. They are a mix of Foundry, Pro Gloria and Old Glory miniatures - I think the different sculpts work well when mixed together. With my Landsknecht shot I wanted some in closer order, like the marching ones in the first photos, and some in looser skirmish order to go in front of the pike blocks. I chose the figures I liked the most to go on the skirmish bases, and also included a few halberdiers in suitable poses to accompany them. The remainder of the shot have made 6 bases of closer order arquebusiers, that can be seen in the above 2 photos on either side of the Artizan pike block. I'm not as keen on these bases but they look ok when next to the pikes.

The Pro Gloria light guns are shown below.  From contemporary illustrations and also from what I have seen in museums it seems these kind of proto-muskets where quite common in the first decades of the 16th century. I think that this was the first set Pro Gloria ever produced, a Landsknecht carrying a pig being the only miniature they had done prior to the Light Gun. I was unsure how to base these, and even considered round bases, but in the end I opted for the 90mm by 45mm base longways as it meant I could fit them in a block with the Arquebusiers if needed. To each base I added an Old Glory figure as well which I think helps to fill the base up more and adds a bit more dynamism to the bases as otherwise the crew poses are all the same. In fact had I painted these miniatures now I would have definitley done a few head swaps.

The final 7 photos are of my Command bases, 5 for the infantry and then 2 round bases of mounted Landsknechts who can ride outside the blocks and look important! I am really pleased with how these all turned out, my only regret is that on the infantry bases some really nice fifers and drummers are obscured by the standards and commanders. Because of this, and because of the posing, some of these bases only have 5 figures rather than the standard 6 I have been putting on the close order pike bases. Under each photo I have listed the different manufacturers used on the base, I think these command sets in particular illustrate how the different manufacturers work well together, especially the Foundry and Pro Gloria figures. With the infantry there a 3 standing bases for the command, one that could be marching or attacking and one dynamic base that is very much leading the attack.
Getting the Landsknechts finished means that I am much closer to finishing rebasing everything, I have quite a lot more cavalry to do and a few other bits and pieces but I am well over half way - which is a relief!