Following on from my post showing the Italian style fortifications I have been working on here they are representing part of an Italian walled town at the start of the 1500s. I am particularly keen on collecting the forces that took part in the War for Naples, 1499-1504, as I love the mix of late medieval and early renaissance clothing and armour from this era. I thought it would be interesting to set these up to represent the assault Gonzalo de Cordoba led on the town of Ruvo during this war in February 1503.
I would love to know more about this battle as it sounds fascinating but information seems rather scarce. Outnumbered by the French, under Louis d'Armagnac Duke of Nemours, in southern Italy, Gonzalo de Cordoba had retreated into Barletta while he awaited reinforcements. As his supplies dwindled Gonzalo took advantage of Nemours punitive action against the town of Castallaneta whose people had attempted to surrender the town to the Spanish, being incensed by the conduct of the French garrison imposed on them.
Learning of Nemours absence Gonzalo marched by night from Barletta to Ruvo. After a short cannonade he breached the walls of the town and two columns, one under himself and one under Diego Garcia de Paredes, assaulted the town. The French, under Jacques de La Palice put up stiff resistance, defending houses and streets, but they were eventually forced to surrender.
La Palice along with many of his men at arms and infantry were taken prisoner. The Spanish also captured a large quantity of supplies, essential for them maintaining their foothold in Italy. Reinforced these troops would later march out of Barletta in April and defeat the French at Cerignola, where Nemours was killed.
The photos below show a Spanish storm party of rodeleros, arquebusiers and dismounted men at arms assaulting one of the breaches in Ruvo. I don't know what type of troops La Palice had under his command in the town but there were obviously gendarmes as he was captured with many of his men at arms. To represent this there are gendarmes who have had time to mount counterattacking on one side and some dismounted ones under La Palice leading an assault down the other street. The rest of the French defence is made of French and Italian crossbowmen with a few arquebusiers and small artillery pieces.
I think the resin pieces make quite a convincing little town, well a corner of one! I could probably do with a few more town buildings but I imagine everyone thinks that when they try and do these kind of set ups. I like the breached wall section, its a very handy piece. At some point I would like to do a really big siege scene with the heavy artillery behind gabions and earthworks on one side and a fortified town on the other. I have my Tudor Archers to continue working on for now. 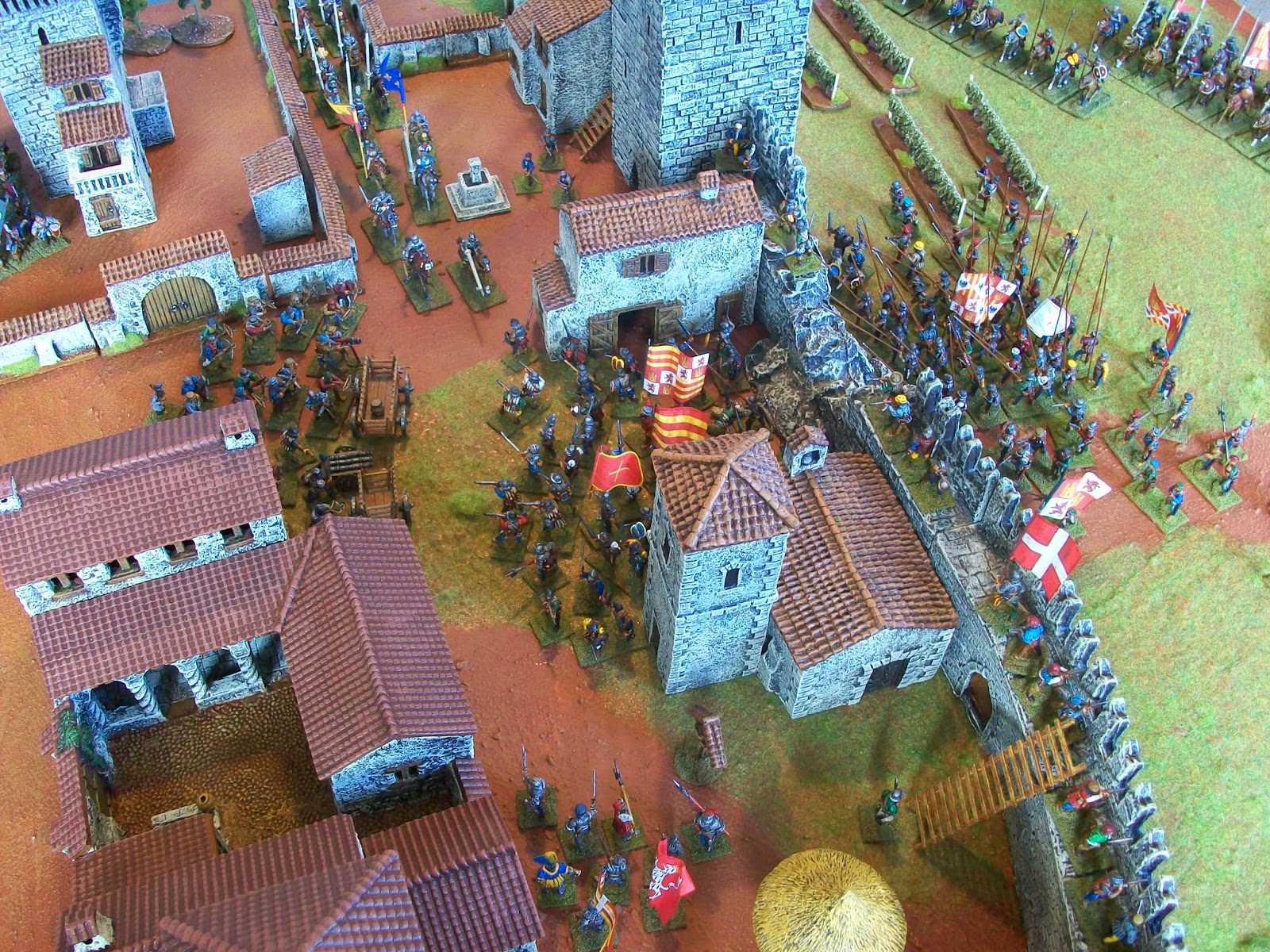