Dice, Bamberg and the Bear

As I don't really have any large blocks of troops to work on at the moment I have been working on a few different pieces. The first are from Stephans excellent Pro Gloria Miniatures, http://progloriaminiatures.blogspot.co.uk/ , the Bear and his handlers and the gambling Landsknechts. Having camped in North America on a few occasions I have a bit of a paranoia of roaming bears so it was fun to be able to paint one up!

The gambling set is great. It really reminds me of the below contemporary woodcut (I think its from a woodcut). While two Landsknechts brawl, another gambles, literally with the devil, while a third vomits on a crucifix. A good insight into what some contemporaries thought of these mercenaries! The dice set fits perfectly in with this and will be great for a camp or castle courtyard. 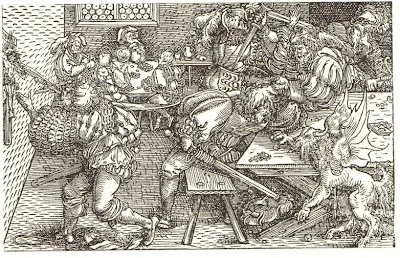 I am still slowly getting my pre printed flags together and painting up suitable standard bearers for them. All the flags and standard bearers will be interchangeable. The flag represents the City of Bamberg. The men at arms carrying it is from Steel Fist Miniatures, http://www.steelfistminiatures.com/products/15th_century_nobles/15c_nobles_pack_a.html , he is meant to be carrying a sword so I have simply put the hilt from a Perry plastic sword in the top of the scabbard so it is not empty. He is in a very late 15th century harness which will sit fine in the first couple of decades of the 1500s. The flag is one of Petes fantasic cloth flags, http://thegreatitalianwars.blogspot.co.uk/ . I have given the men at arms a slightly longer banner pole than a lot of my standard bearers as, due to his full harness, I would expect him to be carrying the banner of a particularly important noble.

Finally at Salute this year I picked up a box of the Perry Men at Arms. I wanted to see what I could do with them to make them suitable for the early part of the Italian wars, possibly into the 1510s. I was going to convert some into Jinetes by simply modelling on riding boots rather than plate, giving them adargas and more simple helmets. However as shown below they are rather tall compared to my TAG and Eureka figures. They are also taller that the old Foundry Gendarmes.  Below I have taken a couple of comparison photos to show this. I think the height difference may be a little too big to have them in the same unit as the other manufacturers figures.
As a result of this I will probably paint them up as generic light cavalry rather than have them as troops to fit in with the cavalry I already have. I will model riding boots on all of them, have them on unbarded horses and give them spears rather than lances. I was also thinking of adding a few TAG 16th century swords and some 16th century head gear. Please let me know if you have any other ideas of how these can brought into the 1500s but bear in mind my abilities with the Green Stuff are very limited !