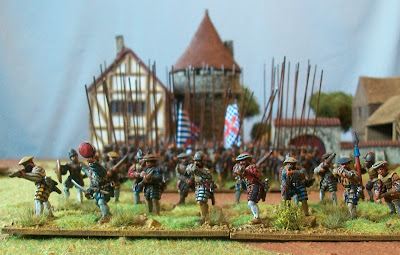 Following on from my last post of the mid 16th Century Pikemen by the Assault Group here are the first of the Arquebusiers to accompany them. They are based in Skirmish order and accompanied by some officers, a targeteer and halberdier to ward off other skirmishers they encounter. I suppose with the inclusion of these other figures they could also be suitable for the "Forlorn Hope" or "Les Enfants Perdus", sallying out in front of the pike or leading an assault on fortifications.

There is no real conversion work here, they are beautiful figures and don't need much changing. The only thing I have done is to remove the Fleur De Lis that all of the Arquebusiers have embroidered on their doublets or sewn to their leather jerkins. This would have shown their alleigance to Valois France in the Mid 16th Century. I like the fact that they have been sculpted onto the figures but as I wish them to be more generic rather than specifically French I have removed them. As you can see in the photos these figures are skirmishing out in front of Habsburg Pikemen so the Fleur De Lis would not have been appropriate here.

I am currently working on some shot in closer order who will form the "sleeves" that accompany the Pike Block. I think after that it may be time to return to the earlier part of the 16th century again.