This is just a quick update on a small project I have worked on over the last fortnight. The Crossbowmen are from the excellent Assault Group renaissance range. I love the way they have tried to differentiate from the Spanish. They are all clean shaven with long hair and some have very short doublets and short, or rolled up, jacket and doublet sleaves. Eventually I want to make the different national elements in the collection all distinctive although I am aware that this may not be that easy! I was hoping Eureka were going to continue with their 100 Club Italian figures so I would have more to add. After inquiring about these they emailed me to say the project has been shelved, which is a shame. What was particularly sad is one of the reasons they gave for cancelling the project was that Foundry have just finished rules and figures. A real shame as having painted many of the Eureka Gendarmes I am sure their Italian Infantry would have far surpassed the new Foundry ones.


﻿﻿ ﻿ The Hail Shot are from the Old Copplestone Grenadier range, I bought them through Vexillia. Only the figure with the blue cap is original, the other 3 have all had the helmeted heads removed and Perry Tudor heads put on. I did this as I wanted them to fit better with the Assault Group figures and with my converted Perry Crossbowmen. It makes them look far less medieval. I am not that confident with conversions on metal figures and these were a good test. I am quite happy with how they turned out and I am now keen to have a go at converting some more late medieval figures and perhaps using the Perry Swiss heads on Landsknechts to build up some more Reisläufer.

This will be my last post of the year. Over Christmas I hope to be able to set everything up and get some army shots. I have a few things planned for next year but I have caught up with most of the stuff I wanted in the collection when I started. This means I will be able to try a few new things, possibly a baggage train using some of the excellent new Perry wagons and Pro Gloria figures that are planned for early next year. Hopefully there will be more releases from The Assault Group and Artizan. Mounted Crossbowmen and Mounted Arquebusiers are the 2 troop types I am really struggling to find good figures for that really suit the 1510s-1520s. The other key element is French Infantry although for now I am happy to use my Spanish and Italians for these.
﻿ ﻿﻿ ﻿
Posted by Oli at 03:38 5 comments:

At the moment I am working on a few smaller projects before starting another larger group. I have just finished these Old Glory Organ Guns. I suppose they are really more of a cross between organ guns and  smaller artillery pieces as they only have 3 barrels and there were organ guns with far more barrels of smaller calibre. Having said that, maybe the term Ribauldequin is more correct for those. I don't know, the terminology for artillery at this time was varied and historians seem unsure as to what writers meant by various terms.

The crew are old GW Empire figures. I am pretty sure they are by the Perrys as they match the Landsknechts the did for Foundry perfectly and have a level of detail only the Perrys seem to go to such as the splits in the back of the hose, where they are sewn, and the individual points modelled on the doublet and hose. They are great figures. The powder barrel and basket of hail shot is by The Assault Group. I decided to show one of the guns as unpainted and the other with the carriage in black and red but with the wheels left unpainted. I can see why they painted the carriages, I much prefer the painted one!


"No money, no Swiss", regardless of whether this was a phrase in the 16th Century, I have now completed my Artizan Reisläufer. Since my first post I have added the shot, the front rank of pikes and a couple more command figures. The 2 extra command I added are old GW figures. The first is specific for the Swiss. They are noted as still using horns at the battle of Marignano in 1515 so I was keen to add a horn blower and I think this old empire figure fits the bill perfectly for the 1510s. He is also in Uri Cantonal colours but with a red coat over them. Ok so maybe the horn is a bit fantastical and the hammer is over the top but he fits perfectly with the Artizan figures. The second one is the Marksmen of Mirigliano Drummer from the old Dogs of War range. He is pretty generic so could be used for Italians or Spanish.


﻿ ﻿I was looking through the Osprey 'Landsknecht Soldier' book while working on these and I noticed one of the Artizan command has been taken from a contemporary picture in the book of the 'Iron Biter'. Here is the original picture, he is not exactly the same but I think the tied on hat is taken straight from the illustration. I really like it when you can trace where the sculptors have got the inspiration for the figure from. I think the Standard Bearer in the group is also taken from a stained glass window of the 16th Century as well although I am not entirely sure.

﻿﻿﻿﻿ ﻿﻿﻿﻿ I think I will do some more standards for them and when I get the chance will mix them in with my Landsknechts to see if they still keep a Swiss feel to them. I am hoping Artizan or TAG do some more Reisläufer figures. I need more to face all the Landsknechts I have painted! I may use the foundry swiss heads to do a few conversions with Landskenchts but for now this is the Swiss contingent.

I have just finished these 30 Old Glory Landsknecht Arquebusiers. I was going to have a break from painting Landsknechts for a while but I thought my pike could do with some more shot. I still have the crossbowmen to do but will finish a few other bits and pieces before tackling them.

These are quite animated figures, I think they will look better when photographed in support of the dense pike blocks. I can picture them skirmishing in front of the pikes. As with the Old Glory Pike I love the wide variety of head gear, only 2 of the 30 figures are identical, and they do capture the bizarre appearance of some of these soldiers well.

This is my first light cavalry unit for the collection. The figures are all from The Assault Group, most are from the Jinetes pack and the command are from the Mounted Conquistadors packs, I have already shown these in a previous post. I really like the figures.
Although plenty of manufacturers have started making figures for the Italian Wars I think the light cavalry is still really neglected. No one makes good mounted arquebusiers or crossbowmen that look spot on for the 1510's and 1520's although there are a few good late medieval mounted crossbowmen that could pass muster. Foundry have just released some Italian Light Cavalry, but its a real shame they are not that great. From what I have seen not a single figure is wearing riding boots!

To match my Landsknechts I have started my block of Reisläufer. The figures are by Artizan. At the moment they only represent Uri but I intend to build on the block either as more figures become available or I may convert a few figures to add. I think I would date most of my collection to about 1510 - 1530 although some of my Italians and Spanish could be used for earlier. At this date the Reisläufer would look very similar to Landsknechts.
Despite this I still wanted to make them look distinctive from my Landsknechts. These two types of mercenary were bitterly opposed to each other, and although the differences in appearance may at times have been subtle they were recognisable at the time. The differences I have gone for from Landsknechts are no Katzbaglers, less colour combinations, not quite as flamboyant colours, the use of white crosses on some of the figures, the wearing of turbans and all of the hat feathers are white. I am pleased with the way they turned out and still have the front rank of the pikes and the arquebusiers to add.

﻿﻿﻿ ﻿﻿To further differentiate from the Landsknechts I have painted the drummer and standard bearer (I think my favourite figure of the lot) in the Uri Cantonal Colours. I recall reading that although most of the troops dressed as they pleased, the troops in these positions did sometimes wear the colours of the Canton. 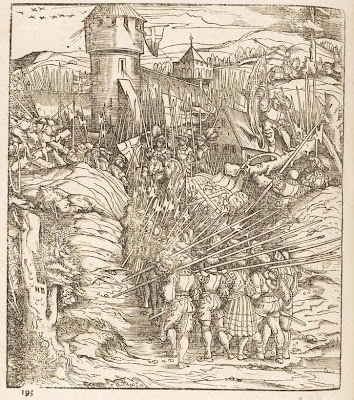 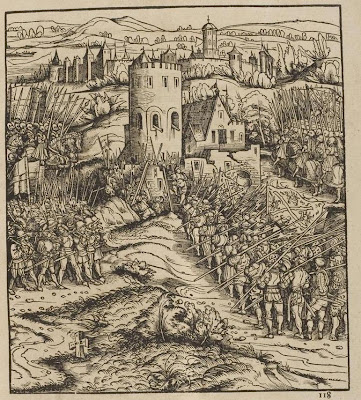 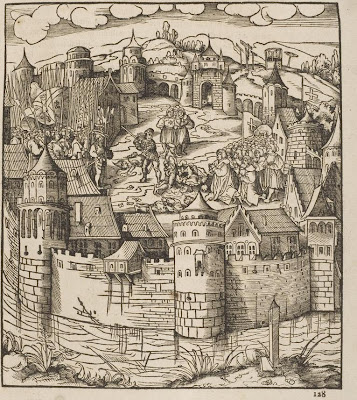 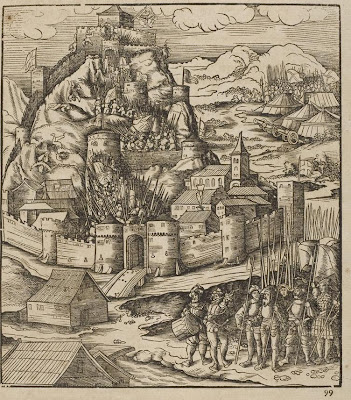