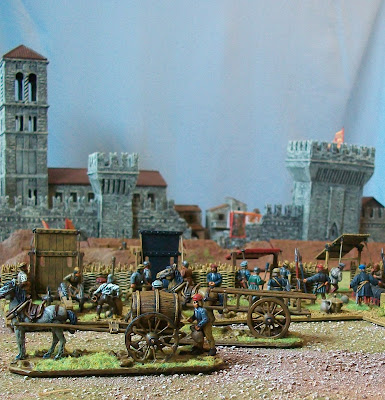 This post is simply to show how the Mantlet and Gabion bases I completed back in August, http://camisado1500s.blogspot.co.uk/2016/08/mantiets-and-gabions.html, look with my artillery bases. Although they are of different depths all my artillery bases have an 80mm frontage, and of course the gun is always in the centre of the base. This means that the Mantlets fit in front of all the artillery bases and can be swapped for variety.

You may notice a wooden tower in some of the photos. This is a terrain piece from Magister Militum I painted up a while back. In this period such wooden defences were quite common, used by defenders and besiegers alike. I have included a few examples of them in contemporary images. The first two are of a block house, I think its meant to be the same building in each image, that temporarily holds out against Maximilians forces in his Weisskunig. You can see the defenders meet a rather grisly end when they are finally burnt out. The second image is a salient reminder that these depictions were as much propaganda as they were efforts to "document" the Holy Roman Emperor elects campaigns. A warning to those who opposed the might of his armed forces. That is, of course, as long as he could temporarily borrow enough money to raise those forces!

The third image is a sketch by Paul Dolstein (another favourite of this blog along with the Weisskunig!) showing the siege of Montfort in 1491. As Dolstein was a bridge builder from Torgau I wonder if he served in these campaigns alongside the Landsknechts as much as a military engineer as a soldier. It is interesting that he included these images of sieges and the accompanying earthworks, in my last post I included his sketch of the Siege of Älvsborg. It does hint to me that he was involved in this aspect of campaigns regardless of whether he fought as a Landsknecht or not. All sorts of wooden towers and stockades can be seen in the below sketch and this is what I was trying to achieve with the wooden tower. I am not entirely happy with it though, it seems to look a little out of place.

The set up in the below photos is a French force besieging the Venetians, I am guessing around late April, May 1509. The French are mopping up Venetian positions in the Terra Firma following their spectacular victory over the Serene Republic at the Battle of Agnadello, but basically its just a chance to show how the guns look combined with the siegeworks! I am happy with the results, they create little miniature dioramas when all the artillery bases and Mantlet bases are linked together. I was worried that perhaps the guns would be a little far from the Mantlets, as in contemporary images the barrels are often shown blasting out right underneath the Mantlets, but they seem to work pretty well.