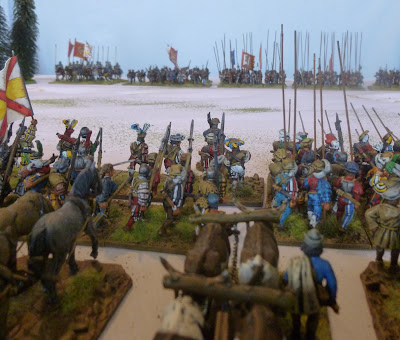 Following on from my Cerignola refight I was keen to try another Italian Wars battle. So here we have Pieve di Cadore (also Pieve de Cadore or Cadore). I liked the idea of an Italian Wars battle in the snow and the fact I could use my landsknecht and Venetians. It didn't really go to plan for a couple of reasons. Firstly whilst I have chosen some photos for this write up about 90% of them were unusable. The white background just made the figures too dark and it didn't work at all. Secondly when I played through the game it went even better for the Venetians than the historical battle! A total rout of the Germans with them never clashing with the main body of Venetian infantry who were blocking their escape. As a result the write up of the actual game is fairly brief.
Pieve de Cadore, 1508

On 29th April 1507 the French king Louis XII entered Genoa in triumph having threatened it with a powerful army. With Louis also being the ruler of Milan the French were now dominant in northern Italy. This was not to the liking of Maximilian I, nominal ruler of the Hoy Roman Empire, who did not want the French closing in on yet another of his borders. In an Imperial diet at Constance Maximilian attempted to raise the funds to invade Italy, assert his Imperial rights and be crowned Emperor. The funds for 12,000 men were raised but Maximilian knew this was not enough to challenge the French.
Not wishing to pass up the opportunity of the money raised Maximilian changed his target from the French to the Venetians. He used the fact they had refused to ally with him against France as well as repeatedly refusing him passage through their territory as a pretext for a war which he hoped would expand the Habsburg territories. In February 1508 his troops began to invade Venetian territory. Despite the snow a diversionary force of around 4,000 German infantry under Paul Sixt I von Trautson invaded the Cadore region of the Dolomites. On hearing reports of this the Condottiere Captain Bartolomeo d'Alviano with a few hundred men at arms and light cavalry and a couple of thousand infantry under Pietro Monte moved over the mountain passes in an attempt to cut this force off.
On 2 March, as the Venetians drew near, the Germans attempted to retreat, adopting a formation with their baggage and camp followers in the centre of an infantry square. D'Alviano's light cavalry,  consisting of mounted crossbowmen and stradiots, held up the Germans, allowing Pietro Monte's infantry to take up a position at a dry stream bed outside Pieve di Cadore and block the German retreat. Sixt von Trautson was slain, reputedly in a duel with Rinieri della Sassetta a Venetian standard bearer (although confusingly I have also read that he was beheaded shortly after the battle) and two thirds of his force failed to escape. A grateful Venetian republic richly rewarded d'Alviano, giving him some of the captured German artillery pieces. Maximilian's main force, heading for Verona, was blocked by d'Alviano's cousin, Niccolo Orsini da Pitigliano and the Habsburg ruler was forced into a humiliating retreat.
The game was played as always using adapted Renaissance Rampant rules and as in the last post the units deployed were fairly large to give the impression of a pitched battle. The aims of the two armies were simple with the Germans having to exit the table from the Venetian table edge and the Venetians having to stop as many of them as possible. All the wagons and camp followers behind the landsknecht were simply table dressing, representing the camp followers the army formed a square around to protect. They had no significance in the rules. The armies used were as follows:
Sixt von Trautson's Germans


As mentioned above this turned out to be a disaster for the Germans. Initially they had an early success, sending one of the stradiot units that came out to meet them fleeing after one volley of shot from a unit of landsknecht arquebusiers. This turned out to be the only Venetian unit they would destroy. As the rest of the Venetian light horse rode around the German left flank and Pietro Monte's arquebusiers and crossbowmen took up position in the frozen stream the oncoming German infantry suffered. Initially the German arquebusiers fired back at the Venetians but all of the German shot were soon routed leaving the rest of their infantry to face a steady rain of missiles from the Italian ranks.

The Germans were already disordered by the time they reached the frozen stream. There were brief clashes with the Italian crossbowmen and arquebusiers holding the steam. The Italians put up a heroic defence and although the crossbowmen were pushed back Von Trautson's men could not force a way across.  Morale amongst them had fallen to such a level that when Von Trautson himself fell to the shot of an arquebusier the whole German force crumbled and began to melt away into the snow with the Venetian cavalry only too willing to chase them down.

As you can see it turned out to be a very one sided engagement. I think most wargamers have had these games, often more times than they would care to remember! It was interesting to see the armies deployed in the snow terrain (also known as a white sheet on the table) and this could still be a interesting battle to refight. I think the German force would need some more missile units to give them more of a chance. Von Trautson had some artillery, as we know d'Alviano was awarded some of it after the battle, but I had imagined that would have been in the baggage train rather than being deployed for the engagement. Maybe a couple of light guns, and some better dice rolls, would have given them a greater chance at breaking out of the Venetian trap.
Posted by Oli at 02:46 24 comments: