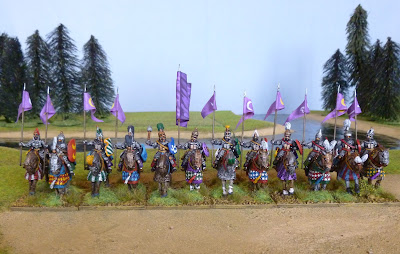 The Ottoman forces continue to grow. The past few weeks have seen work on a variety of bits and pieces to round off this army. Of course it will never be "completed" as such, none of my projects ever really are but the aim has been to represent at least the major elements of a late 15th early 16th century Ottoman army. So we have more Akinji, a unit Sipahis of the Porte, a command base, musician and some casualties.

The Akinji are mostly Old Glory figures with a few from the Assault Group mixed in. All of the horses are from the Assault Group. This unit fits in really well with the Akinji already completed, http://camisado1500s.blogspot.com/2020/01/ottoman-raiders-akinji-and-azabs.html. I will mix all the different bases of Akinji together for even more variety. The Ottomans fielded thousands of these light cavalry and I am currently working on a couple more specialist units of light horse to further boost the numbers.

Next we have some Ottoman heavy cavalry, Sipahis of the Porte. Part of the Qapu Khalqi, the "Gate" or "Court people" they were essentially the Sultan's own household troops and slaves, sometimes both. Perhaps better known as the Kapikulu Corps, there seem to be varied spellings. For the time period covered by this army the Janissaries were also part of this organisation, also known as the Qapu Kullari "Gate-slaves" or "Court-slaves", but from the beginning these household cavalry had formed the core of the Kapikulu. Ian Heath provides some detailed information on these formations in his "Armies of the Middle Ages, volume 2". By the end of the 15th century this household cavalry, known as the Qapukulu Süvarileri or Kapikulu Süvarileri, consisted of six companies of horse. The cavalry were also known as the Bölük Halkı, "regiment men".

The first two were the Ulufeciyan or "Salaried men" who were divided into left and right divisions as to where they stood on the battlefield in relation to the Sultan, the Ulufeciyan-i yesar and Ulufeciyan-i yemin. Originally made of Arab, Persian and Kurdish Gazi volunteers the second two companies were the Gureba, meaning poor strangers or foreigners, again distinguished by their battlefield positions as the Gureba-i yesar and Gureba-i yemin. The last units of the Kapikulu Süvarileri were likely established in the reign of Mehmed I, so the late 14th early 15th century. They were the Silihdars or "weapon-bearers", notable for wearing the janissary hat or ak börk in red rather than white, and the Sipahi-oghlan or "Sipahi children". These formed the real elite of the cavalry and were recruited from the janissaries and household slaves with members of the Sipahi-oghlan coming from slaves who were children of the nobility.

A final guard cavalry unit also worthy of a mention, was the Müteferrika, the "Seperated". It was formed of the sons of Ottoman vassals, who were being held as hostages by the Sultan to ensure their fathers remained loyal. Despite their unusual diplomatic status these youths were also trained as elite horsemen and formed a personal cavalry guard, although their numbers were never very great.

It took a while to work out how I was going to represent these troops as there a no really great figures for earlier heavily armed and barded Sipahis. I really like the Assault Group miniatures but they are definitely more for the second half of the 16th century onwards, especially as they carry lots of pistols. I wasn't going to represnt the Silihdars, with the red ak börk as this would be a lot of conversion work and really I was after a more "generic" unit of household cavalry, although perhaps there was never really such a thing. It seems they also all had their own specific banners but as the standards on these figures are interchangeable that is not too big an issue for now.

The resulting unit is made up of Old Glory Sipahis, with shields from all sorts of  manufacturers, mounted on Redoubt Enterprises steeds. I have converted half of the helmets on these figures, either by adding plumes (I knew all those ones I removed from the janissaries would come in handy) or just by making them more pointed with green stuff. The horses have also had plumes added to some of the chanfrons. The result is a clourful and unique looking unit, although I can tell some of the Assault Group figures will be joining the force to bring it into the 1560s and 1570s at some point!

Whilst working on these units I have also done a few other bits and pieces to really fill out the army. For playing any games casualty bases are essential and eight of these are shown below. All of the figures, apart from the chap in the bottom right hand corner, are converted Assault Group janissary figures. It is very easy to add turbans to the bareheaded figures to turn them into fallen azabs or akinji. The fleeing figure on the bottom right is an Old Glory miniature.


The Assault Group make a superb Ottoman general, shown below in all his splendour. I feel the standard bearer is such a great figure that he could be a commander himself and I am tempted to convert another of these standard bearer miniatures to make a further command base. I can imagine him carrying a mace to show his status, perhaps as a nod to Dürer's great image of an Ottoman leader from the early 1500s, shown below. Any chance to get a Dürer image into a blog post has to be taken!

Finally to join my kettle drummer on a camel I have converted a kettle drummer on horseback as well. This figure is an Old Glory archer with Essex Miniatures drum sticks and kettle drums, mounted on an Assault Group horse. I am really pleased with how he turned out especially as he is not a bad representation of the Bernhard von Breydenbach image that I was basing him on, see the figure in the foreground below. I am really tempted to do some more mounted Ottoman musicians and have kept back a few more Old Glory horsemen for this purpose. It is often more fun working on the supporting pieces for a collection that the actual units themselves!