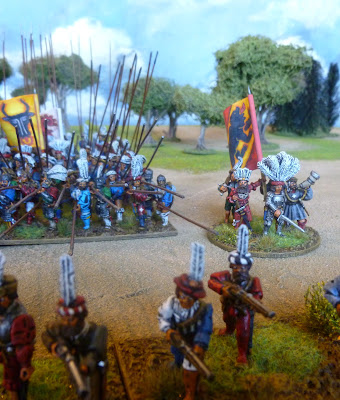 I have been painting up some bits and pieces that have been on the "to do" list for a while. One of these is a command base for the Swiss or Reisläufer troops in my collection. If you have followed this blog for a while you will know that the differences, or at least the perceived differences, between the Landsknecht and Reisläufer have been an interest of mine, have a look at this earlier post for some of my thoughts on this: http://camisado1500s.blogspot.com/2013/05/wip-more-swiss-pike.html. This command base provided an opportunity to have a set of distinctly Swiss figures to represent a captain of these famed mercenaries and his personal bodyguards.

When I worked on my Swiss pike back in 2013 I really enjoyed doing the unit command bases but on the field they are always tucked away amidst a sea of pikes and plumes. This new captain with his spectacular plumage is a second attempt at my original Swiss Captain. The figure uses an Assault Group armoured body from their superb early renaissance range with a turbaned Perry Miniatures Swiss head. On my first attempt at the figure, see the link above, I added plastic feathers to make a plume of ostrich feathers. This new captain is even more over the top with a spectacular gendarme plume from Steel Fist Miniatures added to the turban. I hope you will agree he looks suitably ostentatious!

The other figures are two Artizan Designs miniatures who have had their sword scabbards swapped with Perry plastic longsword scabbards whilst one has had his halberd replaced with a two handed sword. The horn blower and younger looking bodyguard carrying a halberd are both old Citadel figures, sculpted by the Perrys. Both have had their weapons replaced with Assault Group halberds, as this makes them look less "heroic", and have had Perry scabbards added to them the same as the Artizan figures. All have white ostrich feathers and three wear the white cross as a field sign. Below are a few pictures of them under the Bernese flag and marching alongside the Reisläufer pike block.