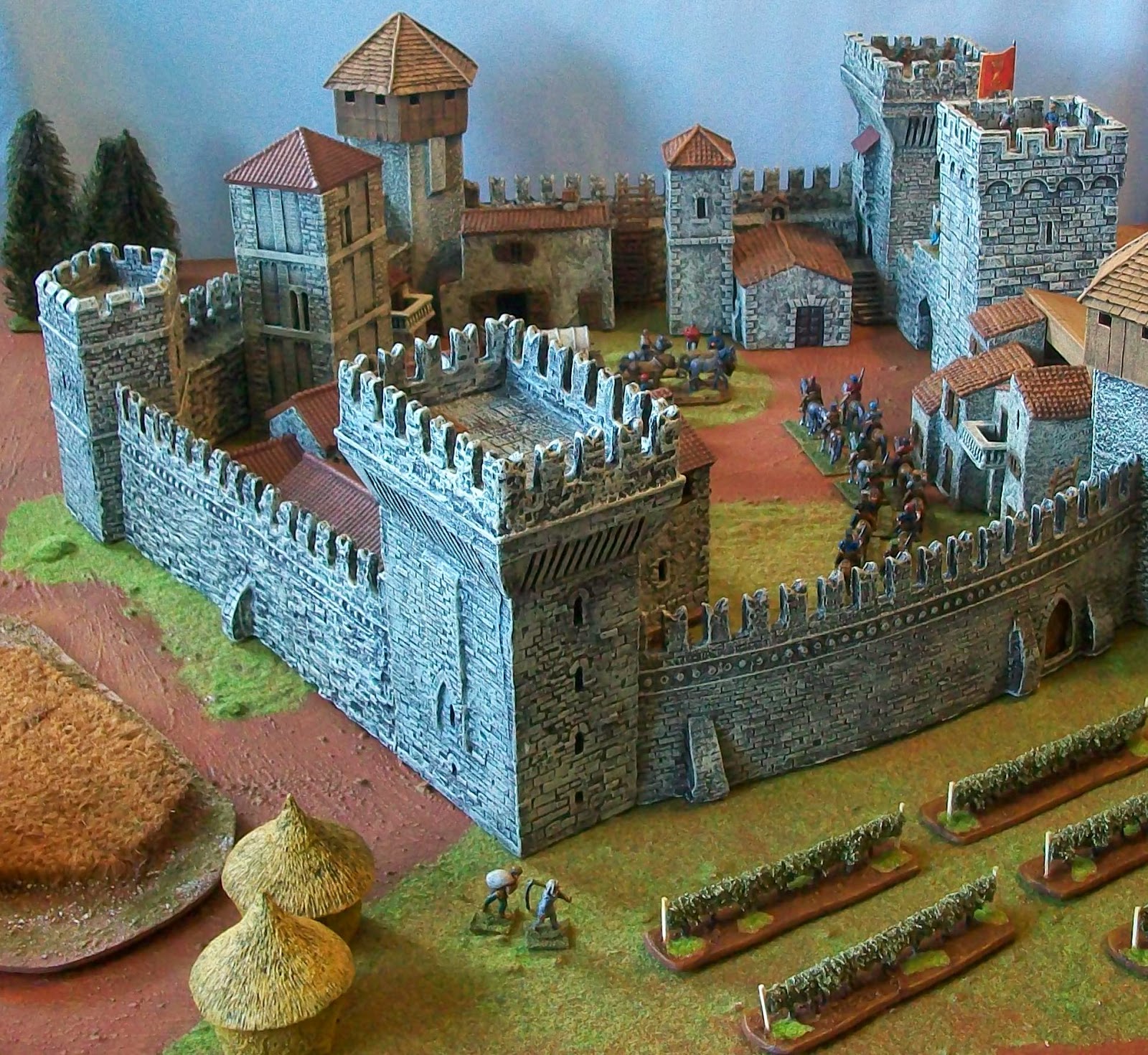 I blame impulse buying at Salute 2014 for this post. I have had quite a few pieces from Magister Militum's Battleground scenery range in my collection for ages, they regulary make appearances in my posts in the background. When I was looking around Salute this year some more of their towers immediately caught my eye and I fell for the dreaded impulse buy! It also meant I had to carry some very heavy blocks of resin home on the tube.
Once I had these this slowly led me onto the net and I picked up a really tall tower from them and a couple more of their Italian style walls so I had enough to make a complete castle. The Battleground stuff is quite old now, perhaps a bit rough and ready, but I like it. I think it gives a really good feel for the period when combined with the figures. The walls and towers are made of that kind of resin that needs to be washed in detergent and then have a few coats of paint as it resists the paint sticking, it's definitely better to use big art style bottles of acrylic and mix up the colours rather than to try and use regular miniatures paints on them. I don't think the models are bad value either, the really tall tower in the first picture below is £30 and it is really tall! It could easily be used as a stand alone fortification for the Border Reivers or Tudor wars in Ireland.
Once I had picked up these pieces I had a look online for other suitable stuff and picked up the Spanish Villa and Tower from Grand Manner as they had a sale on. Their stuff is beautifully made and detailed, there is interior detail in both the buildings I bought. It is expensive though. I don't think I would have bought from them unless they had had the sale on.
Below is the resulting castle made from these new pieces along with my older stuff, some buildings from Hovels and a couple of towers, the ones with the hoardings on top, from Ebay. I am really pleased with the result, although I am aware it probably would have been better to have the castle walls in a different colour from the buildings inside and that I should have differentiated between the brickwork and plaster. The towers do look like giant blocks of cheese when on their own but I like the effect of it all together. The castle is made of quite a mish mash of manufacturers so painting all the buildings and walls the same colour brings it together but also keeps that feeling that bits have been built at different stages which is common in most medieval fortifications.
So below are some pictures of a relatively peaceful scene. The garrison of a Venetian castle prepare to escort some wagons to their destination. A final sack is loaded onto the wagon as they ready to set off under the eyes of the garrison commander and castles priest. The first couple of photos show the tall tower from Magister Militum.


The photo below gives a clear picture of the tower from Grand Manners Spanish Napoleonic range. I am very impressed with this piece, there is a bell tower extension that goes with it that I am tempted to pick up in the future so I haven't glued the roof onto it yet. To the left of this is a pentagonal tower from Magister Militum, its a great piece, especially if you want to angle the walls from it rather than having them continue straight or turn at a right angle. Its also a very heavy piece of resin and would be lethal if thrown from any real castle walls itself!


The final pictures of the castle courtyard show the Grand Manner Spanish Villa from a few angles, again it's a very detailed piece with internal details and lift off rooves. Although its shown here as part of the castle it makes an great stand alone item of scenery. I have also taken some photos of the pieces being used to show part of an Italian town in a slighty more battle ready scene which I will post up soon.