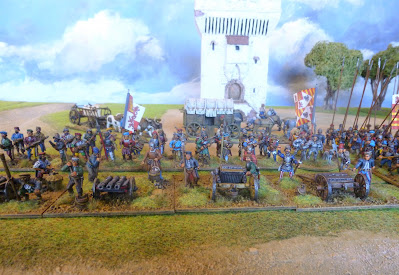 Some new bases for the blog today, three more organ guns for the collection. One is an Old Glory miniature whilst two are from the old Hinchcliffe range which unfortunately no longer seem available. This is a real shame as the Hincliffe pieces are quite unique, especially the one with three sets of barrels which are rotated to be fired in turn and looks to be based on this http://assets.londonist.com/uploads/2016/02/img_3569.jpg. The photos show four pieces as I had already rebased one of the guns a few years back. The release of the Assault Group's Italian artillery crew, https://theassaultgroup.co.uk/product/italian-civilian-labourers-gun-crew/ finally prompted me to paint up the Hinchcliffe models and rebase the already painted gun.
I would love to know exactly how these guns were used in early 16th century armies. For his 1513 invasion of France, Henry VIII took 120 organ guns. Forty were assigned to each of the three wards into which the army was divided, the vanguard, mainward and rearward. In 1544 his army included 50 double barreled "shrympes", strange looking pieces that may have performed a similar role. Francesco Guicciardini gives an indication as to how these guns may have been used when describing the dispositions of the Spanish at the battle of Ravenna in 1512. He states "Pedro Navarro who led 500 infantrymen and had no place in the formation, had placed 30 carts over the moat and in front of the infantry. These carts were like scythed chariots used by the Ancients and were armed with small cannons and a long spike on top to better resist the French assaults".

From the description it is hard to know what the Spanish "carts" looked like. I am guessing they may have been more like the organ gun I painted up for the Tudor English a while back: http://camisado1500s.blogspot.com/2017/09/tudor-artillery.html. Granted Guicciardini doesn't even state they were multi barreled but the fact they were "armed with small cannons" does make me think they were some kind of organ gun. What seems more clear from Guicciardini's text is that these type of guns were intended as infantry support weapons or to defend earthworks rather than as offensive artillery pieces.  As such Stuart and I have been experimenting with the rules for this style of multi barreled pieces and tried them out in our game in  December, http://camisado1500s.blogspot.com/2022/01/the-almaynes-on-foot-would-diverse.html. We used them as "one shot" unit additions rather than as pieces that operated separately. They were removed from the game once a devastating volley had been fired. This worked well in the first test of the rules but we will try them out some more.

Below are some photos of the organ guns defending a ditch and backed by Spanish pikemen and arquebusiers. Maybe a few more with spikes on are needed so I can do a refight of Ravenna! 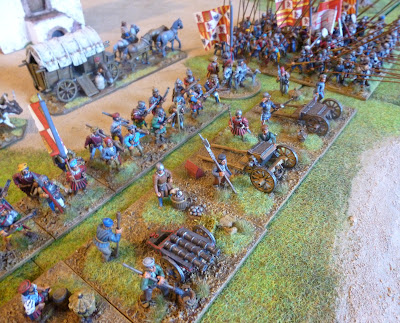