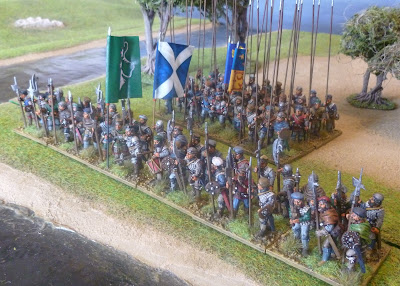 Following on from my Scots pike block here is a second unit of Pete's excellent new sculpts, https://www.ebay.co.uk/itm/255257595473?hash=item3b6e89ce51:g:cwIAAOSwvZ9hp5bx.  Each pack of the pikemen comes with 4 different polearms comprising a Jeddart stave, Lochaber axe, halberd and bill, although it is always questionable as to how this terminology was actually used in the period. I have mixed these in with an assortment of other spears and polearms from my spares collection. The same is true for the targes, whilst some are those that come with the figures I have also added some targes by other manufacturers for variety. The border polearms, together with the targes and cloaks really give the unit a distinctive northern feel.

Rather than representing the lowland pike that formed the majority of the infantry in Scots early 16th century armies this unit represents border levies and as such could be fielded as both Scots or northern English troops. The first few photos show them as Scots, under the banner of the borderer Lord Home. The photos then show them as 1540s borderers accompanied by English archers. They are perfect for the type of infantry that would have been seen in the prolonged 1540s campaigns in lowland Scotland that have come to be known as the "Rough Wooing". England, first under Henry VIII and then under Edward VI's protector, Edward Seymour the Duke of Somerset, waged war on the Scots in an attempt to force the betrothal of the infant Scottish Queen Mary to Henry's son, Edward. This only served to push Scotland into a closer French alliance with Mary becoming betrothed to Henry II of France's son, Francis, instead.

As stated in my previous post on the pikemen, these figures are suitable for the first half of the 1500s and as such would also be great for Flodden in both the English or Scots armies. The final photos show two individual bases of the borderers and also show them as northern levies for 1513, under a Percy standard. I have really enjoyed painting up these two units and they have forced my hand into collecting further troops for the Earl of Arrans Scot's of the 1540s. I am currently working on some mid 16th century border horse with the hope of building sufficient forces to be able to wargame battles such as Haddon Rigg and Ancrum Moor as well as the attempted garrisoning of Scotland and siege of Haddington.