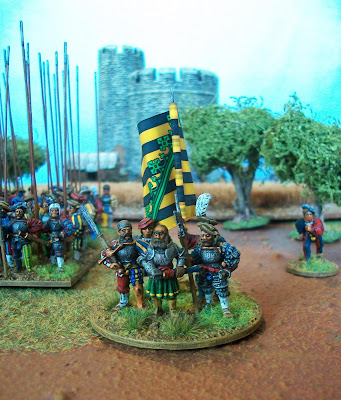 This is my second command base. I have entitled the post "Landsknecht Obrist" but this chap could also represent a dismounted high ranking French or Imperial commander from about 1515 on into the 1530s. Only one of the Landsknechts is a newly painted figure, the others are all from the "figures with no home" box that I am left with after rebasing the collection! The Landsknechts are by Wargames Foundry and the page, who carries the commanders helmet, is by the Assault Group. I am finding the Assault Groups pack of Italian/Swiss Papal Guards really useful for these kind of vignettes as they wear characteristic early 16th century coats and come open handed which means they can be used for all sorts of roles.

The Commander himself is the Götz von Berlichingen character that was made by Pro Gloria, sadly currently unavailable at the moment, but as Warlord have bought the range I am sure he will be rereleased at some point. The left arm is his prosthetic limb but he could simply be another captain wearing only one gauntlet. It's certainly a suitably dramatic miniature, even if his eyebrows may be a little over the top! In the last picture I have shown the base with von Berlichingen's coat of arms flying, one of Pete's fantastic Sixteenth Century flags.

I have also finished the Italian infantry that I painted the shields for, shown in a post a month or so ago. I will get them photographed and posted up in the next few weeks. I want to wait until I can combine them with the other Italians I have already completed before I take the photos.  I'm currently working on more generic early 16th century pikemen, to represent Spanish, French or Italians, mixing and matching figures from a few different ranges but I'm still not entirely happy with the results at the moment. It's hard to make late 15th century figures look more suited to the 1500s, especially when the are armoured. I may post an update of my progress in a week or two. 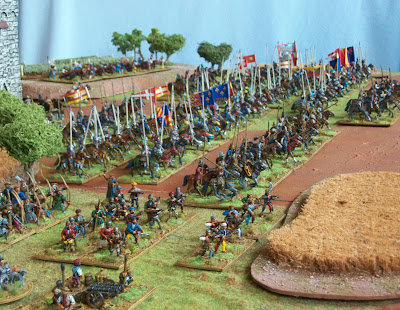 I know I have done a few "full army" style posts recently where everything is set up, since the rebasing they are much easier to do! Over the summer I was keen to photograph the collection covering my whole 8' by 4' table. For these photos I decided to use the figures to depict a French Italian Wars Army, referring back to an earlier post from 2012, http://camisado1500s.blogspot.co.uk/2012/01/french-army.html. There have been some big changes since that post, notably the banners and bases.
The figures shown here are meant to depict a French force from roughly 1512, the Battle of Ravenna. The heraldic flags displayed are for Frenchmen who fought at Ravenna with lots of more generic French or Louis XII period flags also on show. The French employ Landsknechts as oppose to Reisläufer as well as Italian Cavalry and Infantry. The native French Infantry comprises Crossbowmen, Archers and Pike. I was worried the French Archers I completed a few months ago wouldn't fit in well but I really think they look the part in these photos. I will leave exactly who they are meant to represent for another discussion!
This was also a chance to add the Convent from Grand Manner to the Italian town pieces I have collected so far and some of the photos focus on the town. I think the Convent makes a great centrepiece for the town and fits in nicely with the other buildings. At some point in the future I would like to do a large scale siege set up but I think there are a few more bits and pieces I need before I try this.