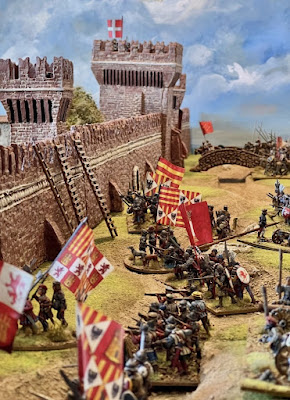 This weekend Stuart visited and we played through a couple of early renaissance games set in different theatres. For the first of these games we chose an Italian Wars battle that I have been interested in for a while now, Gonzalo de Cordoba's storming of the French held town of Ruvo in 1503, http://camisado1500s.blogspot.com/2014/09/ruvo-1503.html. As Stuart had recently finished a Jacques II de Chabannes command base, https://stuartsworkbench.blogspot.com/2022/03/jacques-ii-de-chabannes-lord-of-la.html we thought that this would be an interesting event to cover. It allowed us to get Chabannes on the tabletop as well as making for a more unsual game as the historical battle was not fought in the open but within the walls of the town of Ruvo.
Ruvo, 1503

The winter of 1502 -1503 saw Gonzalo de Cordoba, El Gran Capitan, and his Spanish army holed up in the Italian coastal town of Barletta. Following the French invasion of Italy in 1494, and subsequent clashes between French and Spanish troops in the Kingdom of Naples, Louis XII of France and Ferdinand and Isabella of Spain came to terms with the Treaty of Granada on 11 November 1500. By this treaty the Spanish and French monarchs would share southern Italy between them, meaning Louis XII could hold onto the Duchy of Milan in the north. Exactly how the Kingdom of Naples was to be shared was ill defined in the treaty.
July of 1501 saw De Cordoba land in Calabria tasked with taking the provinces that had been allotted to Spain in the treaty of the previous year. In the following months both the French and Spanish armies were keener on taking new territory into their hands than making any attempt to divide the kingdom equally. Discussions between De Cordoba and Louis d'Armagnac, Duke of Nemours, the French commander, over what to do with disputed areas took place between April and June 1502 but these came to little. As De Cordoba awaited instructions from Ferdinand and Isabella skirmishes with the French developed into war. Lacking disciplined pikemen that could match the Swiss mercenaries of the French as well as the heavy cavalry to match the French gendarmes in the open and being outnumbered by the French forces in the peninsula the Spanish retreated to Barletta whilst garrisoning some outposts.
As Spanish reinforcements made their way to southern Italy De Cordoba played for time. He saw an opportunity to strike in February 1503 whilst the Duke of Nemours was occupied by the town of Castallaneta. The townspeople had attempted to surrender the town to the Spanish, being incensed by the conduct of the French garrison forced on them, and Nemours had led troops to the town in order to take punitive action. Hearing of Nemours absence De Cordoba sortied from Barletta with a force, which included the Italian Condottieri Prospero and Fabrizio Colonna, and made a night march to the town of Ruvo. After a short cannonade he breached the walls of the town and two columns, one under himself and one under Diego Garcia de Paredes, later to become a Spanish folk hero known as the "Samson of Estremedura", assaulted the town.
The town was held by a French garrison under Jacques II de Chabannes de La Palice who had a force of possibly 300 lances and a similar number of infantry under his command. His men put up stiff resistance, leading to a fierce house to house battle. Eventually La Palice was wounded in the head and forced to surrender. La Palice surrendered to a man at arms under the command of the Spanish captain Diego Hurtado de Mendoza, reportedly throwing away his broken sword declaring "Neither you nor another will have it. Never by my hand". The Spanish also captured a large quantity of supplies which they took back to Barletta. On being reinforced by 2,000 landsknecht, sent by Ferdinand's ally Maximilian I, De Cordoba would march out of Barletta in April 1503 and defeat Nemours and his French army at Cerignola.
Scenario
The "Chroniques de Louis XII" by Jean d"Auton, d.1527, describe La Palice as putting up a dramatic defence of the town and we used this source as inspiration for the game. The names of some of his captains in the game are taken from the chronicles as is the idea of a Spanish escalade, or ladder assault.
The game represented the Spanish attack on Ruvo with the Spanish entering from a breached wall and over another wall to represent the escalade. Diego Garcia de Paredes' retinue would make the escalade attack whilst the troops under the command of De Cordoba would enter from the breach. The aim of the Spanish was to get three units into the town square at the end of a turn. The French would try to stop them. The photo above shows the entry positions and the objective. As always we played the game using our heavily modified and ever evolving "Renaissance Rampant" adaptation of Lion Rampant. Stuart took command of Ruvo's French garrison under La Palice whilst I took command of De Cordoba's Spanish.
Hidden Units
At the start of the game the French player could place any infantry units that did not have attached organ guns or carry pikes into buildings within Ruvo noting down where they were located. The Spanish player did not know where the hidden units were. During the French turn these hidden units could exit the buildings they were hiding in with a shoot, attack or move activation. In the attack or move activation they left the building to carry out the action. If they shot they would also be placed outside of the building in the direction which they were shooting to represent them emerging from cover to shoot. If a unit failed an activation whilst hidden in a building it was still placed outside of the building in the direction it would have acted in. This represented the troops giving away their position but failing to act. Once out of a building a unit was committed to the fight and could not re-enter.
The Gates
If the Spanish player could get a unit of infantry to the town gates, see the photo above,  they could try and open them to allow cavalry in the following turn. To open the gates the Spanish player had to have a unit in base to base contact with the gate scenery piece and make a successful move activation. If they succeeded they could then bring on the following:
2 Units of Jinetes
1 Unit of Men at Arms
These three units would count as part of Gonzalo de Cordoba's retinue and could enter the game via move activations the following turn from the gates.

Escalade
Diego Garcia de Paredes Spanish retinue entered the game from the wall via an escalade. A unit within this retinue had to make a move activation to move from the base of the wall in order to enter the town. They could not shoot or attack until the move activation had been made.

The Breach
De Cordoba's Spanish retinue entered the game from the breached wall. A unit within this retinue had to make a move activation to move from the base of the breach in order to enter the town. They could not shoot or attack until the move activation had been made.
Victory Conditions
The Spanish would win if they could occupy the town square with three units at the end of a turn. The French would win by preventing this. If any of the Spanish units were battered and in the square they did not count towards the three units needed to achieve the victory.

This retinue would enter via the breached wall.

And if the gates could be opened:
2 Units of Jinetes
1 Unit of Spanish Men at Arms
The cavalry would enter from the gates.
Diego Garcia de Paredes, the "Samson of Estremedura"
1 Unit of Foot Knights (Diego Garcia de Paredes, retinue leader)
1 Unit of Rodeleros
1 Unit of Spanish Arquebusiers
2 Units of Italian Infantry (the Italian Condottieri Prospero and Fabrizio Colonna)
This retinue would enter via an escalade from the walls.

A short account of some of the action is below but the pictures and captions are probably the best way to get an idea of what happened. These "street battle" games are chaotic and it is difficult to give a blow by blow account of what took place!


The attack started with Gonzalo de Cordoba's retinue hesitating to enter the breach, only Diego Hurtado de Mendoza and his men at arms rushed forward through the crumbling walls. The escalade was more successful with Diego Garcia de Paredes and the Colonna cousins leading their Spanish and Italian infantry down from the walls and into Ruvo. The French garrison wheeled organ guns into the narrow streets and attempted to blast the attackers back. This did little to deter the Spanish and the aventuriers facing the initial attack were slain as they attempted to fall back.
Two distinctive areas of fighting now developed. There was a brief clash at the breach as French halberdiers garrisoning the town rushed out from the towers and tried to halt De Cordoba and his men. The Spanish numbers in this area were far too great and the French counter attack came to little. Outside the main church of the town the French were more successful with their archers being able to inflict casualties on the advancing Spanish and Italian troops.

The fight outside the church developed as more units entered the fray. The French captain, Jacques de Monsenayns, charged out into the courtyard and in a fierce melee defeated both Fabrizio and Prospero Colonna, sending the Italian infantry back. The "Samson of Estremedura", De Paredes, challenged Monsenayns from accross the courtyard and as the two met in a personal duel De Paredes lived up to his name and slew the French captain. His victory was short lived as De Paredes and his dismounted men at arms then received a charge from their mounted French counterparts. De Paredes was felled with his men. A hail of shot from a group of Spanish arquebusiers then sent the French horsemen reeling back.
With his troops being defeated piecemeal La Palice realised he had to act. Holding his horseman's pick aloft he charged down a unit of Spanish arquebusiers as they rushed into the town square. Flushed with this success he then drew his sword and led his men into a unit of Spanish pike who were headed towards the centre of the town. This charge was not as successful and loosing some of his gendarmes in the clash La Palice was pushed back. Caught off guard his retreating men were caught by a charge led by the first man through the breach, Diego Hurtado de Mendoza. La Palice was unhorsed in the melee and casting away his sword he swore ""Neither you nor another will have it. Never by my hand". As La Palice surrendered to De Mendoza and his men De Cordoba's small army took the town. Ruvo had fallen to the Spanish.

A different take on the normal Italian Wars clashes this game was a lot of fun and it was great to try and recreate part of Ruvo on the tabletop. It did become a little one sided as Stuart's French suffered from being slowly fed, unit by unit, into an oncoming Spanish steam roller. Regardless of the defeat Chabannes, La Palice, put in a great first performance on the wargaming table and ended up being defeated by troops in Diego Hurtado de Mendoza's unit, which is what happened in the historical battle! My victory on the tabletop was to be short lived when I took command of the French against Stuart's Tudor English in a game set on the Franco-Spanish border, a write up of which is to follow shortly.
Posted by Oli at 00:28