Earthworks and Cats on Pikes! 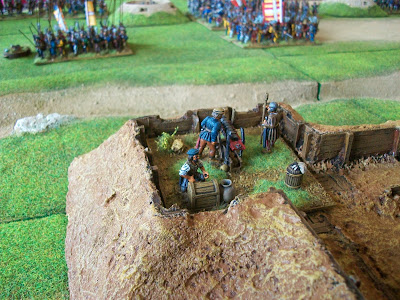 While the work on my 1540s Landsknecht Pike Block continues (they will be finished eventually!), I thought I would post up some pictures from the Summer of my repainted set of Earthworks. The original paint work on them can be seen here: http://camisado1500s.blogspot.com/2018/03/the-siege-of-pavia-october-1524.html, in one of the Pavia games Stuart and I played early in the year. With a new battlefield of a different coloured earth it was also necessary to repaint the Earthworks. In the photos you will also notice a couple of the Sconces in the same style as Stuart's ones that we used in that game. These were made by David Marshall of TM Terrain and are really useful terrain pieces. I included some contemporary pictures of these Sconces in the write up of the Pavia games, linked above.

The repainted Earthworks are resin and nearly 20 years old! They were from a manufacturer called Stronghold Miniatures if I remember correctly. The pieces are so old that I had painted them up before painting my old battlefield. The battlefield was a really dark reddish earthern colour, see the link above, simply because I had already painted the Earthworks that way! In fact they even appeared in the background of a couple of photos in my first ever post on this blog: http://2.bp.blogspot.com/-wEYLfsje4_s/Tb8fOKHDcMI/AAAAAAAAACA/ELcgIOgKy-0/s1600/100_0661.JPG. They were definitely in need of a good repaint!

Getting the Earthworks to match the same colour as the earth on the terrain boards, the ditches and the Sconces did not go well. I tried all sorts of different paint mixes and when I did get the same match it just made the Earthworks look like Blancmange, it didn't work well, something to do with the texture of the resin. For this reason I repainted them in a slightly browner earth tone which although not perfect seems to fit the other earth well and stops the Earthworks looking too different from the rest of the terrain. What do you think? I would be interested to know if the contrast is still too great? I suppose freshly dug earth or repaired Earthworks would look different to older fortifications anyway or is this just my excuse!


When I bought these years ago I tried to order a really extensive set of pieces that could be used for loads of different defensive set ups. There are some nice touches to the set including a breached section, bastions, corner and end pieces, a gateway and a smaller sally port to allow the defenders to sally out unoticed and disrupt an assault. It's great that with a fresh lick of paint they are still going strong. Even a cursory reading around the subject of 16th Century Warfare will reveal that earthern defences were a key part of both attack and defence. They had been used extensively in Ancient Warfare and onwards but the rapid increase in the use of gunpowder weaponry that the late 15th to early 16th Century witnessed made them even more necessary. Many of the key Italian Wars battles, Garigliano, Ravenna and Bicocca to name but a few, were centred around assaults on Earthworks, it's difficult to playout the battles, sieges and skirmishes of the era without a decent set of them. These really do the job, especially when combined with the Trenches on the boards and the castle pieces I have already collected.

Below are some photos of the Trenches and Earthworks in action from a game I played out over the Summer. The game was set in the Autumn of 1503 where a stalemate had developed between the French and Spanish forces on either side of the Garigliano River. Eventually this was resolved by Gonzalo de Cordoba's daring attack across the river which won the Battle of Garigliano on 29th December 1503. Prior to this however the French under Francesco Gonzaga, Marquis of Mantua, had formed a fortified bridgehead across the river and attempted to dislodge the Spanish in a number of assaults from this position. Gonzaga passed command to Ludovico of Saluzzo when these attempts failed and before the Spanish attack in late December. My refight of one of these French assaults turned out to be rather dull with the French failing miserably in the face of a trench and the defended Spanish Earthworks so I didn't write a blog post on it. It is a conflict I will play out again at some point but with a few tweaks. The photos shown below are all from the game.

While on the subject of fortifications I couldn't resist including a couple of rather odd things I discovered a while back but have never written a blog post where these findings fit in. I was reading through Ambroise Paré's "Journeys in Diverse Places", which can be found online: https://www.bartleby.com/38/2/. Paré was a surgeon to the French Monarchs in the Mid 16th Century and wrote a fascinating account of the campaigns he took part in, one of which was the Siege of Metz in 1552. As one of the defenders he notes how during the siege the Imperialists knocked down one of the City Walls only to find a large Earthwork behind it:

"The wall having fallen, our men cried out at those outside, “Fox, fox, fox,” and they vented a thousand insults against one another. M. de Guise forbade any man on pain of death to speak with those outside, for fear there should be some traitor who would betray what was being done within the town. After this order, our men tied live cats to the ends of their pikes, and put them over the wall and cried with the cats, “Miaut, Miaut.

Truly the Imperials were much enraged, having been so long making a breach, at great loss, which was eighty paces wide, that fifty men of their front rank should enter in, only to find a rampart stronger than the wall. They threw themselves upon the poor cats, and shot them with arquebuses as men shoot at the popinjay."

It seems that as a taunt to the Imperialists besieging the city, the French hung live cats from their pikes and dangled them over the defences! This seems odd but it also reminded me of an image I had seen before depicting the Siege of Padua in 1509, completed around 1521. The image, shown below, depicts an assault on a bastion of Padua where the defenders are holding a cat out on a pike while the attack is taking place! Was this some 16th Century Siege tradition? Does it have something to do with traitors or cowardice? If anyone knows anymore about the meaning of this taunt and if it was something that went on regularly I would be interested to know more? The traditions and cultures of 16th Century Warfare always fascinate me.

That is probably enough rambling for today, I'd better get back to finishing this next block of Landsknechts!