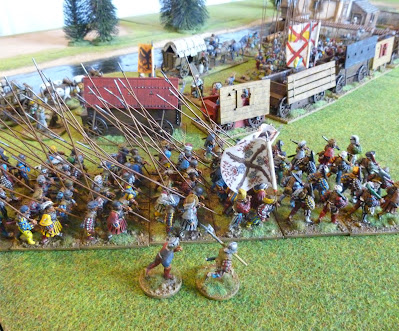 Building an Ottoman army for the early 1500s I had to include war wagons, especially as they can also be used for much of my 16th century collection. Developed during the Hussite Wars of the early 15th Century, in which they were found to be particularly effective when combined with gunpowder weapons, by the 1500s war wagons were used in many armies, particularly those of Eastern Europe. The war wagons may not have played such a key tactical role in other armies as they did for the Bohemians but they were useful for fortifying camps and providing a mobile defensive structure. The Ottomans had adopted them by the end of the 15th century when they could be deployed with battlefield entrenchments and manned by the Sultan's janissaries when the Ottomans fought pitched battles.
I have used resin models from 1st Corps which look to have been based on Hussite wagons. As I intend to use them for different parts of the collection I am happy to use these as they are and haven't done any conversion work on them. War wagons seem to have taken all manner of forms so I have included a few contemporary images below to give an idea of how they may have looked. The first, probably most well known, image is from the later 15th century, and shows a German fortified camp. It is full of lovely details, such as the chap going to the toilet in the bottom right and the guards at the swing bar gate at the camp entrance on the left. The wagons used to form the camp walls would probably be more accurately described as "wooden shields on wheels", similar to mantlets, although the second wagon ring is clearly of proper wagons.

The next two images show details of war wagons from the "Battle before the gates of Nürnberg" depicting the forces of Kasimir von Brandenburg-Kulmbach in his clash with Nuremberg in 1502. The city deployed forty war wagons for the encounter which can be seen in the image. For more detailed images and a write up of this battle Daniel S has written two excellent blog posts: http://kriegsbuch.blogspot.com/2016/01/the-brandenburg-troops-in-kirchweih-von.html and http://kriegsbuch.blogspot.com/2016/01/nurnberg-foot-in-kirchweih-von.html. The wagons in these images look closer in design to those I have painted up from 1st Corps.

The final image is another late 15th century one which shows a quite different style, more like a wooden "pill box". It is being used as a moveable fortification as the gate for a set of siege works. Although these images are all from the late 15th early 16th centuries war wagons continued to be used throughout the 1500s. Henry VIII took twenty to the Siege of Boulogne in 1544 which fully covered the horses who trotted inside the wagons frames! The Duke of Albany's Scots forces in 1523, which have featured in the games myself and Stuart have played recently, included war wagons covered in steel and brass, carrying men and artillery pieces. Even as late as 1573 they were used by the Dutch in an attempt to relieve those besieged in Haarlem during the Eighty Years' War.
To show how they look with the figures here are two sets of photos. The first set shows the Ottoman battlefield entrenchments. A combination of trenches, stakes, gabions, mantlets and wagons protects the Turkish guns and the janissaries deployed within the fortifications. The wagons are based so that they will fit in with the mantlet and gabion bases that I made for my artillery pieces a while back. This gives a bit of continuity and means they all fit together well, presenting a formidable set of defences.
The second set shows the wagons forming the edge of a briefly paused Imperial marching column which is hastily forming a defensive set up against a river bank. I specifically painted up some janissaries to man the wagons for the Ottomans but for the landsknecht I have crewed the wagons with figures that still remain unbased from the "Great Rebasing of 2015", a laborious event that is still etched in my memory! I think they work well in both set ups and will hopefully be useful in a whole host of wargaming scenarios. They have even got me tempted to attempt some figures for the German Peasants' War but I guess that will have to wait!