Jinetes were the Spanish light cavalry who used tactics developed from centuries of fighting the Moors in Spain during the Reconquista. Converting a set out of the Perry Plastics has been a project I have wanted to do for ages. Originally I was going to convert them from the Men at Arms plastic set, as I did with my lighter cavalry, but when I found out the Perrys were working on a specific set of light cavalry for the late 15th century I decided to wait for these. There is not really that much conversion work in the figures in all honesty but a few little changes have been done to make them look like Jinetes. One thing I will note is that I think Jinetes actually rode their horses in quite a different style from Western European cavalry in the late middle ages. While these figures ride with their legs nearly straight, Jinetes would have ridden with shorter stirrups and bent knees. When working on these I also picked up some inspiration from Miguel's awesome work on "Wars in Miniature", http://warsinminiature.blogspot.co.uk/2014/03/nuevo-proyecto-guerra-de-granada.html.
The first obvious thing about the figures is that they carry the typical Moorish leather shields, Adargas, while a few carry bucklers. The ones I used are from Redoubt Enterprises and Wargames Foundry and they really help to change the style of the figures. I have left some as undecorated leather while others are painted.
The horses have also had some green stuff added to change the trappings on some and alter the saddles on others. I feel this gives a more Spanish/Moorish flavour to the figures and was also a good chance for me to experiment a bit more with the dreaded green stuff. This was also used to give all the figures (whose faces can be seen) beards and/or long hair. I am definitely improving with the green stuff in this regard and it took me surprisingly little time to model these features on. I am not sure my photos are good enough to really show this but I hope some of the close up photos below will do the hair styling some justice!
I did think about javelins, their most famous weapon, and even bought some javelins in holders from Essex Miniatures. I decided not to use them in the end as I have not seen any contemporary images of Jinetes holding javelins in holders. I may do another set, as I have 2 more Perry plastics boxed sets of cavalry, and try putting javelins in their shield hands. I know they were meant to be expert horsemen but you do wonder how easy it was to ride with a arm holding a shield and a couple of spare javelins!
Despite the lack of javelins I think the changes really help to give a distinctive feel to the figures. I reckon these figures could be used in Spanish armies from Ferdinand and Isabella's conquest of Granada that started in the 1480s all the way up to Italy in the early 1520s at a pinch. 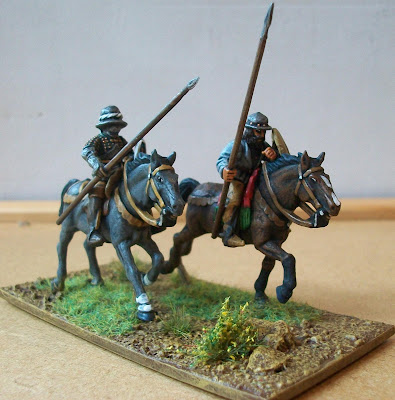 With the above figure on the left I wanted to include a turban as I like the idea that some of the Granadians would have continued with traditional styles of dress and this would be reflected in the Spanish armies. I was also influenced by the below painting by Vincenzo Catena in the National Gallery. The kneeling figure has European armour but wears a turban and his horse has trappings from Islamic Spain. I would hazard a guess that the artist may possibly have been influenced by Jinetes when painting this? If I do another set of Jinetes I think I will include a few more turbans as they also help to give a distinctive character to the horsemen.

While on a Spanish vibe I was lucky enough to spend last weekend visiting Granada with my brother. It was a fantastic trip with fantastic weather, tapas and probably a few too many cervezas, but it was a holiday! I joined the massed ranks of tourists to visit the Alhambra and although it was busy and we were herded around by our tour guide (who was actually very good) it really is a must see. I was amused that Charles V had put an enormous Italian Renaissance style palace (that was never finished) right in the middle of the place! He has also added his imperial eagle and motto "Plus Ultra" into many parts of the Islamic Palaces which is slightly incongruous as well. The 14th and 15th century Islamic parts of the complex are breathtaking, really like something I have never seen before. If you do visit you really need to book as far in advance as possible as the amount of visitors a day is strictly limited.
While in Granada I also made a pilgrimage to the much quieter Monastery of Saint Jerome, my brother and I were the only people in the enormous church which was silent and cool despite a scorching day outside. The reason we visited was to see the tomb of Gonzalo de Cordoba. Anyone who has read this blog for a while will know that one of the parts of the Italian Wars that fascinates me most is Gonzalo's campaigns in Naples at the turn of the fifteenth century, culminating in the battles of Cerignola and Garigliano in 1503. His grave is a suprisingly simple marble slab, shown below. Apparently there was once a great tomb covered in momentos of his victories but this was destroyed during the French occupation of Granada in the 1800s. I also visited the tombs of Ferdinand and Isabella in the Royal Chapel of the Cathedral (the trip wasn't as morbid as I am making it sound!) where they had some original flags from the conquest of Granada which
were amazing to see but unfortunately photos weren't allowed in there. It is a great place to visit for anyone interested in the renaissance.