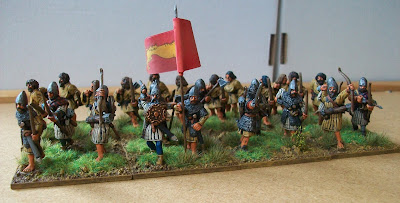 Continuing with the Gaelic theme up next are some Scots "Redshanks" to serve as mercenaries in my Irish Army. They are a mix of Claymore Castings figures, now sold by Antediluvian Miniatures https://antediluvianminiatures.wordpress.com/2018/02/07/shop-historical-range/, and some converted Old Glory figures from their English Civil War range. Initially this unit was intended to simply be a mercenary force to add to my Irish army but the megalomaniac in me realised that by combining them with the Galloglass I have already painted and some more suitable Kern figures I could quite easily have a sizeable Highland Scots contingent. Add this Highland contingent to these chaps http://camisado1500s.blogspot.co.uk/2016/02/picard-pikemen.html, of course swapping the banners, and I'm not far off a respectable Scots army for 1513. Definitley something I will be thinking about in the future.

So the aim with these figures was to create a unit that could serve both as Redshank mercenaries in Ireland and also as a Highland contingent sent to fight in the Anglo-Scots wars of the 16th Century. If I had just been aiming to use them as Redshanks I wouldn't have bothered with the standard bearer and more formal command base. As with the Irish infantry and cavalry I thought it would be interesting to have a look at some of the depicitions of Highlanders that we have from the 1500s. What I find fascinating is that they are very different from the kilted characters you may imagine from Braveheart! Also of note is how much they have in common with the Irish infantry, the Galloglass and Kern, discussed in a previous post.

The Redshanks serving in Ireland were known as such because of their habit of going barefooted. Although this etymology has been debated Holinshed in his Chronicles of 1577, a picture from which is shown below, stated "For in the north part of the region, where the wild Scots, otherwise called the Redshanks, or rough footed Scots (because they go the wild Scots bare footed and clad in mantels over their saffron shirts after the Irish maner) doo inhabit". Similarly John Elder a highland priest and scholar called himself a Redshank for the same reason. Holinsheds quote and the image that accompanies his text make clear how similar to the Gaelic Irish the Highlanders and Scots of the Western Isles may have looked.

A common source for the attire of the Gaelic Scots, well the more aristocratic ones at least, are Tomb Effigies. From the two shown above it can clearly be seen that the more wealthy Highlanders and men of the Western Isles looked very similar to Irish Galloglass, with mail shirts and long cotuns. This is not surprising seeing as they shared a similar culture and the Redshanks or "New Scots" as they were sometimes known were simply a new wave of mercenaries arriving in Ireland from a similar area to the Galloglass. What is perhaps surprising is that the two images of tomb effigies shown above date from well into the 16th Century. It seems that these warriors preserved a very unique style of armament very different from much of Western Europe.

While the Galloglass families began migrating to Ireland in the later 13th Century the Redshanks became a common feature in Gaelic Irish armies from the mid 16th Century onwards. That is not say that they did not feature in Irish warfare prior to this. By the end of the 14th Century MacDonalds had already begun to settle in Northern Ireland, in Antrim, and their men were hired by the O'Donnells in the 15th Century. By the 16th Century Clan MacDonald were fielding armies in their own right, clashing with Shane O'Neill at Glentaisie in 1565. It was Shane's wars that seem to have led to something of an influx of Gaelic Scots mercenaries. They could arrive, by galley, from the Western Isles and Seaboard constituting something of a seasonal force for Irish Chieftans to hire.

That they were effective soldiers is demonstrated by the willingness of the Irish Chieftans to hire them and also by the serious threat they posed to the Elizabethan Goverment in Ireland. The English termed them "New Scots", the old Scots, it seems, would have been the Antrim MacDonalds and even older Galloglass families. The Elizabethan Government was keen to stop them migrating into Ireland and joining the various wars, feuds and rebellions that took place in the second half of the 16th Century. They attempted, sometimes successfully, to stop their galleys with their own warships, against which the galleys could do little harm. Even at the very end of Elizabeth's reign, while the succession was a major issue, James Fullerton of Trinity College Dublin was acting as a secret agent for the English and liaising with James VI in order to prevent these warriors of the Western Isles and Seaboard travelling to Ireland to fight in Tyrone's Rebellion.

As demonstrated by the images shown here they seem to have been armed with bows, axes and two handed claymores. Previously mentioned in my description of the Galloglass it is interesting that there don't seem to be any images of the Claymores worn in a back scabbard. The two images of Redshanks below show the swords tucked under one arm. Ian Heath in his excellent "Armies of the Sixteenth Century" gives references to them also sometimes being armed with arquebuses and sometimes even being hired as pikemen, halberdiers and shot, especially those Highland Scots who had already seen service in mainland Europe in the Dutch Revolt. An example Heath gives is a reference to Sir Nicholas Maltby, Lord President of Connaught, who in 1580 pushed 600 Redshanks out of his province. They were described as "180 horsemen, 180 targets (bucklers or perhaps Scots targes), 100 long swords, the rest ...darts, shot and galloglass axes, all as well appointed as ever I saw for their faculty'. Evidently by the end of the 16th century the Redshanks could be quite versatile in terms of their weaponry, it is easy to see why the English Government found them such a problem.

A final point worthy of note and something that always makes me smile is how different from the traditional image of Highlanders the men of the Western Isles and Northern Scotland actually looked in the 16th Century. It does seem some wore plaid as demonstrated by a quote from Jean de Beaugue, a French Officer who served in the French army that helped the Scots fight off Henry VIII's and later Protector Somerset's "Rough Wooing" in the 1540s. Describing some Highlanders at the Siege of Haddington he states "they were naked except their stained shirts and a certain covering made of wool of various colours, carrying large bows and similar swords and bucklers to the others (that is the Lowlanders)". Similarly another Frenchman Nicolay D'Arfeville said of them that "They wear like the Irish a large and full shirt coloured with saffron, and over this a garment hanging to the knee, of thick wool, after the manner of a cassock. They go with bare heads and allow their hair to grow very long and they wear neither stockings nor shoes, except some who have buskins made in a very old fashion which come as high as their knees". This description ties in nicely with the cloak and boots worn in the image of "Le capitaine Savvage"from the 1560s. Note also that this "Captain" has a quite unsual crest on his helmet. Perhaps this is something fanciful on the part of the artist but it does remind me of some of the odd Galloglass crests talked about in a previous post.

I hope this brief look at a few images and descriptions has given some idea of how these men were dressed and armed in the 1500s. When looking for miniatures to represent them we can say mail shirts, bascinets and cotuns would be the armour of the more aristocratic Redshanks while the less well off would have looked very similar, infact in many ways identical, to the Irish Kern and may also have carried targes, again similar to the shields used by the Irish. For weaponry bows, axes, two handed swords, javelins or darts and even arquebus's would all pass muster. I have used the Claymore figures to represent the more well off Gaelic Scots. There have been a few small conversions. I've removed some of the weaponry slung over a few of the figures backs, claymores and large axes, and instead replaced the weapons with targes worn on a strap. I'm just not a fan of the idea of large weapons worn over the shoulder, especially when many better off soldiers in this period, of all societies, had boys or servants to carry their weapons for them. This and the fact they are not all barelegged aside I do think these figures are a great representation of Highlanders for the 14th to 16th Centuries.

The second rank of Scots is made of some Highland archers from Old Glory's English Civil War range. Not perhaps the nicest figures but they are pretty generic Gaelic troops which makes them useful. With the conversions I have done to them they could also pass muster as Kern if required. Originally about half of them were wearing bonnets and they did not have such baggy sleeves. Some butchery with a knife and a bit of green stuff work, shown in more detail below, has soon made them look more the part. While I could have left out these lesser armed archers I like the idea of mixing them in with parts of my Irish army to form a unit of the Highlanders that fought at Flodden under Huntly, Lennox or Argyll. The whole unit is shown under a banner that is based upon one captured at Flodden by William Molyneux and I have a few figures left over that I think I will use to do another of these command bases with.

Finally if I am going to use my Galloglass, Kern and Redshanks to game with I am going to need some casualty bases. OK, they aren't the most varied bases seeing as I have only used two old Redoubt Enterprises sculpts! I have tried to ensure there are a few minor variations on each base. They will do the job nicely though. This unit of Redshanks would have been the end of my Gaelic project, for now at least, but then Michael Perry went and sculpted some Irish Galloglass and Kern with chieftans and pipers as well. Very well timed in my opinion! With this being said I will be posting up some more Gaelic additions soon.