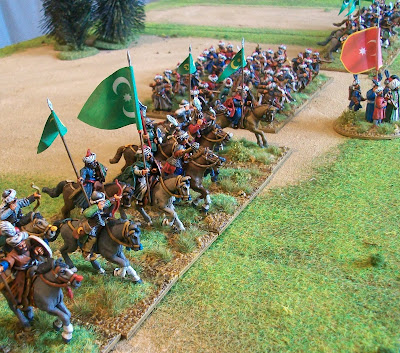 A new project for a new year. A state that had to feature on this blog eventually as so many of the European monarchs struggled against it during the 16th century, it is of course the Ottoman Empire. This starting force is a mix of irregular infantry and cavalry, hopefully there will be more to come. They will be able to face my Imperialists in the field. After Mohacs in 1526, when the Kingdom of Hungary was effectively divided in two, the Ottomans pressed on the Habsburgs in Austria besieging Vienna in 1529. My Italian army will be suitable opponents for the Ottoman-Venetian War of 1499-1504. The early Spanish will even be able face them as Gonzalo de Cordoba led the Spanish as Venetian allies in this war for a brief period, besieging the castle of St George on Cephalonia in the autumn of 1500. The mid 16th Century forces will be able to face them in all sorts of engagements as by the mid 16th century they were pressing on Christendom through Eastern Europe and in the Mediterranean. I may even do a few stands of Knights of Rhodes as well so they can face the Hospitallers.

While many Ottoman figures can be used for a long historical time period my aim is to try and collect an army suitable for around 1490-1550. To start with I will avoid lots of Janissaries with muskets and Sipahis with pistols as I am keen for this to be an early 16th century army. The first unit tackled is the Akinji, the Turkish light cavalry. As a sidenote when discussing this army I will use the phrases "the Ottomans" and "the Turks" interchangeably but I am aware that much of the "Turkish" army was not ethnically Turkish at all, being made up of various different troops from all over the vast Ottoman territories. A good example is the Janissaries who were recruited from, certainly in the early 16th century, boys conscripted from the Ottoman's Christian subjects in a levy known as the devshirme and converted to Islam.

Akinji is the Turkish word for "raiders" and these horsemen were exactly that, being positioned in frontier Ottoman territories and thriving on raids into enemy territory, in times of supposed "peace" as well as war. In the 15th and 16th centuries they seem to have always accompanied Turkish armies in relatively large numbers and were expert mounted archers and skirmishers.  A few contemporary pictures of these horsemen are below. All the images used are from western sources of the period so a caveat must be added that in some of the depictions of the Turks there sometimes appears to be an attempt to demonise them, note the heads on the lances in the third image below as an example. The Turkish images I have looked at tend to be from slightly later in the 16th century and are also less detailed so I have chosen these western ones, and of course I don't need any excuse to get a few more Dürer pictures on the blog!


The three images above depict what appear to be ethnic Turkish horsemen as they all wear turbans. Ottoman light horse are also depicted in Balkan style caps so it likely that many of them were Christian troops fighting in the Ottoman ranks. What is clear from all three of the depictions above is how similar they look, the turbans aside, from the Stradiots. Their clothing and armament are very similar, which isn't a surprise as Stradiots developed their style of warfare over decades of frontier fighting with the Ottomans.

The Akinji units are made up of a mix of Assault Group and Old Glory figures, all on Assault Group horses. The Old Glory horses are probably more accurate for Turkish horses in the fact that they are very small but the TAG horses have more detail that mark them out as being specifically Turkish, such as the knotted tails, which can be seen in the Jan Swart van Groningen image above. I have added some feather plumes to the figures and used a mixture of different shields to help represent the irregular nature of these troops. The lance pennons and standards help to unify them. I picked these up from Wargames Designs. The result can be seen below.

The Azabs, a name which means "unmarried", were the masses of irregular infantry that were recruited by the Ottomans for each campaign. As with the Akinji, a few contemporary images have been included below to give an idea at what I am trying to represent here. The Zonchio image, depicting a naval battle between the Venetians and the Turks in 1499 shows lots Turkish troops and their shields while the other images clearly show the style of robes worn by these infantry, the colour images showing the distinctive turbans around the small red caps. I have chosen to paint these infantry in fairly drab colours as these were normally poorly equipped troops.

The Azab's equipment was not in any way standard, the ones I have painted up so far carry bows and handguns. The commander and his bodyguard are nearly all TAG figures while the rest of the Azabs are all Old Glory. This is defnitely one of the better Old Glory ranges. The turbans and robes of the Turkish troops suit the rather erratic Old Glory sculpting style. I am curently working on a unit of Azabs with a wide variety of weapons so hopefully I will be able to post them up soon.