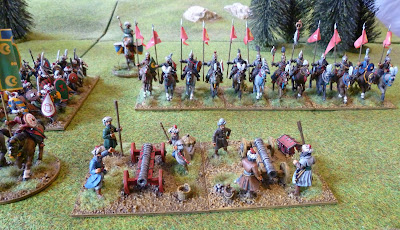 The next instalment of the Ottoman army is complete. A pair of Ottoman guns and a unit of Sipahis, a word meaning "Soldier" in Persian. Those shown here are "Timariots". In some ways they were similar to the earlier feudal Knights of Western Europe. Timariots were the cavalrymen in the Ottoman army who were given a "Timar", being an area of land allotted to the Timariot from which he would collect revenue from the agricultural output in return for military service. There were also Sipahis of the Porte, salaried household cavalry, which I intend to cover at some point as well.

The Sipahi figures shown below are a mixture of Old Glory and Assault Group riders on Assault Group horses. The shields are from a variety of different manufacturers. There have been small conversions to some of the helmets and the positioning of the miniatures. Most of them are well equipped in a mixture of mail and plate while a couple are poorly equipped with just helmets. Perhaps these are "Cebelus", the men-at-arms that would accompany wealthier Timariots, who have not managed to equip themselves very well or possibly just poorly armed Timariots. They were meant to be suitably equipped in order to retain their Timar. Timars were not hereditary and were handed out as new lands were conquered. This meant that Sipahis from newly conquered lands were often Christian rather than followers of Islam.

Most of the horses have also had plumes of feathers added to their bridles to make them more flamboyant than the horses of the Akinji. The standard bearer carries an Ottoman horse-tail or tug, deriving from the Persian tuq. These originated from the 13th century and were used to indicate the authority vested in a chieftan by the Sultan. According to Ian Heath (Armies of the Middle Ages Volume 2) a Sancak Bey, provincial governor, would have a one horse-tail tug. A Beylerbey, essentially a senior provincial governor, or vizier, a high ranking leader in the Ottoman State, would have two. Grand viziers would have three with the Sultan himself having four or later six horse-tails. Although the Sipahis also carry bows, implying that they could fight in a looser skirmish style, I have based them in a closer formation to differentiate them from the Akinji who were a lighter form of cavalry.


The field guns, shown below, are from Old Glory, with the crew being a mixture of Essex, Assault Group and Old Glory miniatures. The figure in the fur hat is a really old Essex figure but I think he works well here as an Eastern European master gunner. The Ottomans often employed European specialists to oversee their artillery, the most famous probably being Orban, who was most likely a Hungarian although his exact origin seems open to debate. Orban cast a medieval "super gun" for the Siege of Constantinople in 1453.

This is hopefully the start of a siege battery that will comprise half a dozen Ottoman guns, a couple of which will be really large. I also intend to work on some more gabions and mantlets so the gunners in the battery can be well and truly dug in and protected as they operate the guns.

In my last post I mentioned that I would try and get some photos of the whole force so far. Here it is below. It's been a lot of work (I hated painting all those shields!) but has turned out better than I had imagined it would which is great, especially as a lot of the figures are quite dated now. There is still along way to go with the gun battery mentioned above to completed along with a sizeable force of Janissaries, more Akinji and the Sipahis of the Porte. I would guess what is in the pictures below is just under half way to what I currently envisage the army to look like. On that note I better get back to some painting!