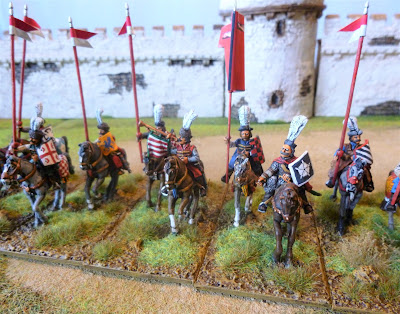 With the Ottoman army looking formidable I have decided to work on another of their opponents, the Hungarians. For many of the troops the Hungarians fielded such as their Gendarmes, Militia, Artillery and Landsknecht I will be able to use my exisiting collection and a simple change of banners and perhaps the addition of a few extra bases to give a Hungarian flavour will be all that is needed. This may not be perfect, especially in terms of the infantry militia but seeing as no manufacturer really makes suitable figures for these it is a compromise I am happy to make.

One essential troop type that will really add a Hungarian flavour to the army are the Hussars. Again we return to Ian Heath and his Armies of the Middle Ages Volume 2. He argues that they were only established as a formal troop type in the reign of Matthias Corvinus in the 15th century after the fall of Serbia, although gusars or usars were a form of Serbian light cavalry in the 1300s. He suggests three possible sources for their name. Firstly that it evolved from Khazar, from the Byzantine Chosarios. Secondly that it comes from the Hungarian huszar meaning every twentieth man. Thirdly, and what seems to be the most likely, that the word comes from gusar or husar meaning a robber. Hungarians organised Hussars in twenty five strong units called turbae. It seems their employment in Eastern Europe by the end of the 15th century was fairly widespread with the Poles, Lithuanians, Austrians and some other Germans also employing them. They would of course go on to become a very famous type of horseman in the following centuries.

But what did they look like in the first few decades of 1500? The image above, an engraving from the end of a sabre scabbard dated c.1500, is probably the earliest image we have, and one I have tried to model the miniatures on quite closely. We have some good images in the Leonhard Beck picture although it is interesting to note they don't have the characteristic long sleeves in these. Some more images of Hussars from the 1510s appear in the Weisskunig, although sometimes I feel it can be hard to tell if they are meant to represent Hussars or Stradiots in this.

The most famous images of early Hussars are from the Battle of Orsha painting, depicting a clash in 1514 between the Muscovites and forces of Lithuania and Poland. These are probably a little later in date than the images above as although the battle was in 1514 the painting is thought to date to from a decade or so later. There are lots of excellent representations of Polish and Lithuanian Hussars in this, I have included a couple of close ups from the painting. Finally we have an image of a Hungarian Hussar from the second half of the 16th century, by Jost Amman, which seems to indicate they had changed little since 1500.

A second source that has proven excellent both for working on these Hussars and on my Hungarian "conversion" army in general is Gyozo Somogyi's "The Army of King Matthias 1458-1526" https://www.amazon.co.uk/Matthias-1458-1526-Gyozo-Somogyi-2014-05-04/dp/B01FKUVRR4/ref=sr_1_1?dchild=1&keywords=armies+of+king+matthias&qid=1604313164&sr=8-1. While the title may be misleading, as Matthias Corvinus died in 1490, the book covers the troop types, coats of arms, banners, weapons and fortifications of Hungarian Armies from 1458 right up to Mohacs in 1526, with much of the books art covering the early 16th century. The art work is a little unusual and there is very little text, which is in both English and Hungarian, but it contains a wealth of pictoral detail for Hungarian armies of the early Sixteenth century and has been really useful for this project, once I eventually tracked a copy down. My Hussars are based on some of the details in these images and also on some from Somogyi's book.

So how have I tried to represent the Hussars of this period on the tabletop? Apart from Old Glory no manufacturer makes these figures for the late 15th early 16th century period. There were a lot of specific features that I wanted to show on the miniatures. The distinctive shields, the lances, some kind of early frogging, the long sleeves and the plumage in the hats.  I wanted at least some of the horses to have the distinctive horse tack where the horses hind is covered.

The resulting unit is a mixture of Assault Group and Foundry Cossack and Polish figures for the riders and the horses are all from The Assault Group. In order to get the distinctive Hussar horse tack Polish Pancerni horses have been used, with the pistols taken off and the space left tidied up with green stuff. Similarly green stuff has been used to add the sleeves to all the Hussars and to add the hair to many of the Cossack figures as these tend to have bald heads where none of the pictures of the early Hussars show them like this. There are a few head swaps in there with Perry Tudor heads having moustaches added along with plumes. The plumes themselves are all from my bits box, one of the advantages of collecting and modelling for decades is the tendancy to build up a load of useful bits like these.

With regards the hats I decided not to model the figures in any of the "Top Hat" styles as from Somogyi's book the Hungarian Hussars seem to have had hats more typical to that shown in the first, etched, image. Saying that a glance at the above contemporary depictions will show a range of hats, especially the "Battle of Orsha" which on close examination reveals a bewildering variety of head gear worn by the Polish and Lithuanian Hussars. For the shield designs my painting skills arent up to the task to paint some of the beautiful designs these shields had. I have attempted to go with some of the portrayals based on Somogyi's artwork and as always transfers have come to my aid to help make up for the painting. On reflection it may have been better to have gone with the designs shown in the "Battle of Orsha" as I could have managed those.

The banner is taken directly from "The Army of King Matthias 1458-1526" which is superb for flags for this army. Pete of Pete's Flags, https://www.ebay.co.uk/sch/petes_flags/m.html?_nkw=&_armrs=1&_ipg=&_from=, very kindly printed out a couple of flag sheets I put together using the PC for the Hungarians. Hopefully I will be able to show the rest in future posts as this project develops. For the lance pennants again I have gone with the above book and shown them in red and white, which seem to be the key colours of the Hungarian Monarchy in this era. The resulting figures are shown below.