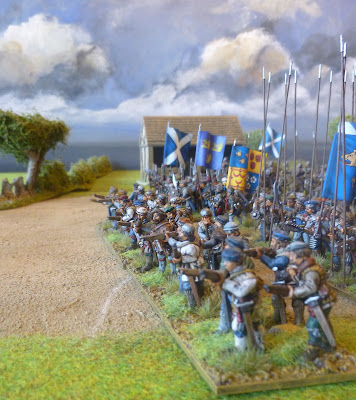 For today's post we have a unit of 24 Scots Arquebusiers, suitable from around 1500 through to 1550. They are from Pete's excellent range of 28mm Scots figures, https://www.ebay.co.uk/usr/petes_flags, although these particular sculpts may not be up on the store yet. I am slowly building up forces to game the events of the "Rough Wooing" which these figures are perfect for. As an example at the battle of Haddon Rigg in 1542, Sir Walter Lyndsay, a knight of St John, commanded a Scots Vanguard of 2,000 men comprising 1,000 pike or "spears", 500 hundred archers and 500 arquebusiers. These miniatures will be great for such a battle as well as all the skirmishes and raids that took place in the late 1540s as Edward Seymour, Duke of Somerset and Lord Protector of England, attempted to subdue Scotland through a series of garrisons.

Some of the figures wear light armour in the form of jacks and strips of mail on their hose. Some wear steel skulls as headgear whilst others are simply in bonnets. They are really evocative of the era and would also be perfect as English border levies. As you can see from the pictures below the arquebusiers fit in well with the pike/polearms troops already released by Pete as well as the Assault Group mid 16th century miniatures. Both ranges were sculpted by Nick Collier so their compatibility is to be expected. Highlanders are next in the pipeline from Pete and Nick and I am really looking forward to seeing how they turn out https://www.facebook.com/media/set/?vanity=petes.flags.5&set=a.608606297389834.