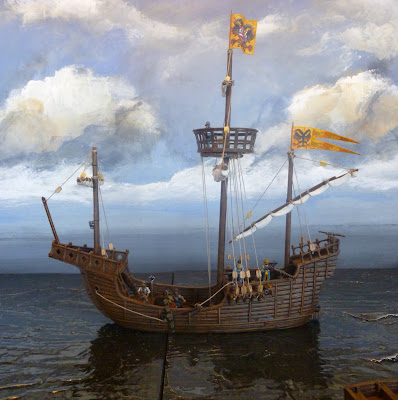 For today's post we have a 28mm merchant vessel, ready to compliment the new harbour terrain boards that David Marshall made. The model is a resin 3D print from here: https://www.etsy.com/uk/listing/1303283920/merchant-carrack-28mm-treasure-island-3d. It is clearly based on Columbus's "Santa Maria" which dated to the very end of the 15th century, see https://en.wikipedia.org/wiki/Santa_Mar%C3%ADa_(ship) Whilst quite a few medieval cogs are available in 28mm I think this design is more suitable for the early 1500s. The two contemporary images below give an idea of the kind of vessels in use in this period. The resin miniature did not come with sails, rigging, a proper crow's nest or the appropriate guns. As such I have had to source these separately and scratch build some parts.
In terms of the scratch building the furled sails are simply tissue paper that has been dampened and rolled into shape before being tied and glued to the masts. Once dry the sails have then been painted with diluted PVA to fix them in shape and, hopefully, make them more robust. The rigging is miniature "rope" and blocks from a model ship building website. I am well aware the rigging is far from perfect and looked at some online tutorials that were terrifyingly complex in this regard! I hope it gives the appropriate impression of the rigging even though it might look completely wrong to veteran model ship builders. I did have to keep telling myself that this is intended to be a scenic item rather than the centre piece of any game!

The crow's nest is from https://www.ziterdes.com/, these guys do some really handy bits and pieces for 28mm ships, whilst the "bases" or swivel guns are a combination of 3D prints and metal miniatures. There is a great book on the armaments of the Mary Rose called "Weapons of Warre" and these miniature guns match the remains of those that were found on the Mary Rose perfectly. In the 16th century they seem to have been referred to as "bases" and the Anthony Roll states the Mary Rose had 30 such "bases". They were breechloading anti-personnel weapons that were operated from a standing position. The model above has 5 of these pieces. It is important to stress that this model is not of a warship but rather a merchant vessel commissioned or pressed into naval service as was common at the time. It's only other guns are two larger calibre wrought iron guns. I have taken these from Wars of the Roses field pieces.

For the flags atop the masts I have followed the same technique used for my infantry and cavalry standards so they can be swapped and changed depending on what side the vessel is in the service of. The accompanying photos show it firstly as a Tudor ship and secondly as one in Habsburg service, inspired by lots of the images in Maximillian's Weisskunig, one of which is shown below. Working on this model was certainly something very new and quite a challenge but I feel I have learnt a lot from tackling it. I have loads of ideas for small scale naval landings as wargames in the future. Sir Edward Poyning's used English ships against Lord Ravenstein in 1492, Brest was stormed by English naval forces in the 1520s, James IV of Scotland subdued the Isles with his navy in the early 1500s and the siege of Waterford, http://camisado1500s.blogspot.com/2022/02/warbeck-deal-and-waterford-1495.html, involved an attack at Lombard's Wear in which Warbeck's ships landed troops only to be repelled. Events like these will make for great small scale games and I am keen to explore these with the new harbour terrain and this ship.

Now would I need a bigger warship to do a refight of Pinkie in 1547...