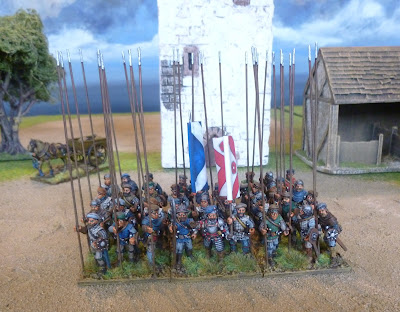 Whilst Pete's excellent flags have flown over my collection for many years today's post puts Pete's first miniature releases in the spotlight. These Scottish pike are superb figures of which there are currently 16 sculpts, four command and twelve different open handed pikemen. They are available from Pete's Ebay shop: https://www.ebay.co.uk/itm/255257595473. They represent lowland Scots infantry and each pack of four pikemen miniatures comes with four different targes and four polearms. I am particularly fond of the polearms which not only include a bill and a halberd but also the more unique weapons of the Anglo-Scots border, the Jeddart Stave and Lochaber Axe.

Sculpted by Nick Collier these figures are wearing a clever selection of headgear that makes them suitable for Flodden in 1513 up to the Rough Wooing in the 1540s. There are lots of great details in the sculpts with bonnets worn over simple scull caps, chains added to the soldier's doublet and hose to protect them from cuts, woolen cloaks and socks pulled up over their hose for extra protection against the wet and cold. The 36 shown in the photos below are painted up as pike but if armed with the polearms described above these figures can be used to represent borderers or northern levies. I am currently working on another 36 that will be armed as such.
The below photos show my first unit of these great figures. The first three show them with no modifications at all save the swapping out of some of the targes with ones from the old Dixon Miniatures Flodden range. The two captains at the front of the unit carry a Jeddart Stave and Lochaber Axe. To give some idea of how they fit in with other ranges there are then a couple of photos of them with my armoured generic front rank pike. Up until now I have been using these figures to represent Scots in my games with simple banner swaps, http://camisado1500s.blogspot.com/2016/02/picard-pikemen.html, so finally having some specific figures for the Scots infantry is great. As these figures are suitable up until the 1540s, when the fighting between Scotland and England escalated into an attempted occupation, the last few photos show them facing off against the Assault Group 1540s English, also sculpted by Nick Collier. I am really looking forward to seeing more figures from Pete.